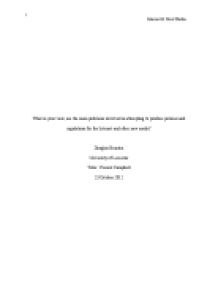 What in your view, are the main problems involved in attempting to produce policies and regulations for the Internet and other new media?

﻿Internet & New Media What in your view, are the main problems involved in attempting to produce policies and regulations for the Internet and other new media? Douglas Brunton University of Leicester Tutor: Vincent Campbell 23 October 2012 ________________ INTRODUCTION The Internet and new media have changed the world. The Internet, ??the electronic network of networks that link people and information through computers, and increasingly through other digital media technologies? (Di Maggio et al 2001) is the fastest growing media channel in history and the most pervasive example of the new media. The new media can be positioned as the result of digitisation and convergence. The transformation of analogue, media specific texts into network neutral digital code has prompted the convergence of three traditionally separately regulated sectors of the global economy - computing, telecommunications and the information and media sectors. This convergence and the apparent ubiquity of the internet have led to profound changes in each of the sectors and the development of global information economies based on ?the production of ?intangibles? [?] code, media, content, design, information and services? (Coyle, 1999) and ultimately to the convergence of communication regulation. In this context, and for the purposes of this paper, Braman?s definition of new media as: ??those technologies that have come into use for mass communication purposes but that have not yet been fully incorporated into our legal and economic systems and for which both personal practices and institutional supports are still undergoing experimentation? (Braman, 2009) elucidates the problems incumbent in developing policies and regulations for the new global information economy. This paper will examine the main problems of regulation including the suitability of current regulatory models to the new media; the reasons for regulation and the features of the new media that give regulators at all levels, the most reasons for concern. In this examination, it will look at how the new media is shaping society and seek to contextualise the impact of the information economy on society. ...read more.

The chain of control imposed on the broadcast media moves vertically down from the political to the legal to the administrative to the managerial and vertically from the bottom up; through the agitation of consumer and advocate groups for the enforcement of broadcast standards. The ?common carrier? model of regulation which governs telecommunications positions this medium of information exchange as ?point to point?; open to all to use but with a closed cycle of communication inferred - a private conversation within a public medium. With this concept of private dialogue paramount, telecommunications regulation seeks to attain network neutrality through basic laws governing ownership and control; governmental supervision of the technical aspects of the medium; conditions attached to operating licenses and concessions and a regulator to seek the public?s interest. It is the concept of the neutral network that led to the technological development of ?packet switching? allowing information to be broken up into smaller ?packets? and sent asynchronously across telecommunications networks and be reassembled at the final destination that revolutionised the communications media. Packet switching meant that everyone had equal opportunity to access as it helped alleviate blockages on the network and faster transmission. The technological convergence heralded by digitisation of content makes the traditional separation of regulatory practice between ??print, broadcasting and telecommunications [?] more and more arbitrary? (Mc Quail 2005 pg20) as digital content is in itself network neutral. RIGHTS OF WAY According to Flew (2002), ??the Internet refers to both a technical infrastructure of computers and other digital devices permanently connected through high-speed telecommunications networks, and the forms of content, communication and information sharing that occur through these networks.? (Flew, 2002 pg12). Due the nature of its use, the ?new media? can be termed interactive - at once both interconnected and interoperable; able to connect interaction across different networks and to access all available forms of information and media content regardless of the operating system used. ...read more.

is a key characteristic. The reality of this ?disintermediation? and the resultant globalisation of the new media promote greater communications across borders and a heightened intercultural awareness between users; which, in turn, gives possibility to the development of what McLuhan termed ?the global village?. Another consequence of the new media has been the ?harmonisation? or convergence of laws and regulations across borders so that they reflect fealty to the same concerns. However, as each society is unique and views on the new media differ; the freedoms enjoyed under national legal systems vary subject to the government?s understanding of and willingness to extend these freedoms to their citizens. As such, the new paradigm of media regulation cedes control of rights of access to national governments but leaves the other fundamental concerns to industry self regulation as epitomized by the end user licensing agreements common to all technology providers. In 2012, much was made of the release of a movie trailer on YouTube which many in the Islamic world found offensive. The subsequent riots led to the deaths of the US ambassador to Libya among others; but YouTube refused to remove the clip as it did not infringe the EULA. It seems therefore, that any attempt to regulate or legislate the new media has to start from the position that the virtual world is different to the tangible and that policy governing its existence should not try to address new problems in old ways but rather seek to define what this world is, recognize the value inherent in it and seek not to control but to mediate its use; thereby allowing the media to transmogrify from the mirror of society and an instrument of control; into what Bourdieu (1986) terms a ?cultural intermediary? at the ?interface of society and technology? (Winston, 1995, p.69) contributing to the creation of new symbolic and representational forms. For after all, according to McLuhan in Carey (1998) ??technologies of communication were principally things to think with, moulders of mind, shapers of thought: the medium was the message.? (Carey, 1998). ...read more.