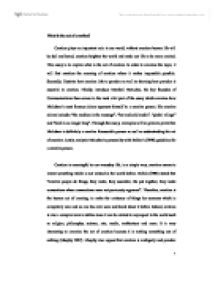 What is the act of creation?

What is the act of creation? Creation plays an important role in our world, without creation human life will be dull and bored, creation brighten the world and made our life to be more excited. This essay is to explain what is the act of creation. In order to examine the topic, it will first mention the meaning of creation where it makes impossible possible. Secondly, illustrate how creation link to paradox as well as showing how paradox is essential to creation. Thirdly, introduce Marshall McLuhan, the key founders of Communications then comes to the most vital part of the essay which examine how McLuhan's most famous claims represent himself to a creative person. His creative claims includes "the medium is the message", "hot and cold media", "global village" and "book is no longer king". Through the essay, examples will be given to prove that McLuhan is definitely a creative foreseeable person as well as understanding his act of creation. Lastly, analysis McLuhan's personality with Balkin's (1990) guideline for a creative person. Creation is meaningful to our everyday life, in a simple way, creation means to invent something which is not existed in the world before. Balkin (1990) stated that "creative people do things, they make, they assemble, the put together, they make connections where connections were not previously apparent". ...read more.

which required more active participation on the audience's side. He stated that television, seminar and cartoons were the examples of the "cold" media because audience have to fill in the gaps of the information that is being given to them. For instance, the television in a family house may just turn on for no purpose such as background noise and illumination. Audiences for the "cold" media are considered to be mobilised. To further illustrate McLuhan's idea, "the medium is the message", he pointed to the light bulb as a clear demonstration of this concept. Supported by McLuhan (1964) and Wikipedia (2007), the meaning that he represented in the concept was to show medium affects the society in which it plays a role not by the content delivered over the medium, but by the characteristics of the medium itself. A light bulb does not contain any content in the way that newspaper or television provided, McLuhan was trying to claim that a light bulb is a medium which has a social effect because it allows human create spaces in darkness. Therefore, no matter what is the content shows on newspaper and television, the medium always contribute some effect on the society. Two of his books, The Medium is the Message and Understating the Media contain similar ideas and supporting each other. ...read more.