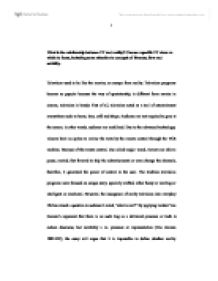 What is the relationship between TV and reality? Choose a specific TV show on which to focus, including some attention to concepts of liveness, flow and seriality.

What is the relationship between TV and reality? Choose a specific TV show on which to focus, including some attention to concepts of liveness, flow and seriality. Television used to be like the movies, an escape from reality. Television programs became so popular because the way of spectatorship is different form movies in cinema, television is handy. First of all, television acted as a tool of entertainment everywhere such as home, bars, caf� and shops. Audience are not required to gaze at the screen, in other words, audience are mobilized. Due to the advanced technology, viewers have an option to review the texts by the remote control through the VCR machine. Because of the remote control, also called magic- wand, viewers are able to pause, rewind, fast forward to skip the advertisements or even change the channels, therefore, it generated the power of control to the user. The tradition television programs were focused on unique story, specially crafted, either funny or exciting or intelligent or emotional. However, the insurgence of reality television into everyday life has raised a question in audience's mind, 'what is real?' ...read more.

Recently, Big Brother have changed Australia's perception of the 'celebrity' and represent how the nature of fame has changed in recent years. Housemates enter the house as regular people and exit as superstars who are invited to regular film premiers and show business bashes. Alison Neighbour suggests that this and the immense popularity of Big Brother indicate the nature of fame has changed dramatically in recent years. "A famous person was once required to have a particular talent, and to work their way up to a celebrated position. Now, instant stardom awaits anyone willing to let the nation watch them in their daily lives, or be humiliated through Production Company's idea of entertainment" (Neighbour 2002:1). Neighbour further suggests that the reason Big Brother has so much appeal is because it represents the aspirations of many Australians - fame and riches for doing nothing. The conclusions that can be drawn from the immense popularity of Big Brother and Australia's recent embrace of reality programs cannot be underestimated. As Kubey argues "Television has become our species preferred and most powerful means of mass communication" (Kubey 1990:XI). ...read more.