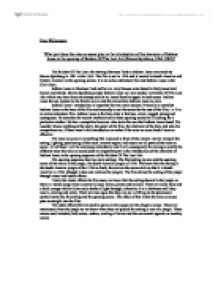 What part does the mise en scene play in the introduction of the character of Indiana Jones in the opening of Raiders Of The Lost Ark(Steven Spielberg, USA 1981)?

In these introductionary scenes Indiana Jones has two costumes; the first that we see is when we discover Indiana Jones' courageous and fearless nature in the jungle. He is wearing a leather jacket, loose trousers, a hat and he carries a whip. He has an unshaven face and he clearly isn't worried about a presentable hair cut. This has the affect of making him look rugged and tough. The two porters are to quite the contrary to the hero Harrison Ford. They are shy, nervous local people who wear dirty scruffy clothes and carried large amounts of luggage. They trundled along slightly depleted and uninterested and give the impression they didn't want to but had to be there. These costumes and their appearances both expose certain differences in the character Indiana Jones and the porters. It shows how much they are to the opposite of each other. Indiana Jones looks to be the superior as he is much better dressed, the porters look to be rather insignificant as they are scruffy, following Indiana Jones about and trailing the luggage with them. Indiana Jones looks to be the leader or the most experienced or the one looking for something as he is leading the three of them. This is also shown through the fact that Indiana Jones isn't carrying anything either except his whip and a map. The second costume is a big change in appearance for Indiana Jones and it throws our original thoughts about Indiana Jones' character slightly at first glance. ...read more.

This conclusion is the weakest part of an otherwise solid essay. Basically, all it does is say "the mise en scene helped to introduce the character" 3 times in a row, and that's not good enough.

To improve it, the author could point out that even the locations iterate the qualities they've identified as essential to Indiana Jones, and that the qualities are part of an ideal masculinity that is deeply woven into the politics and culture of Europe and America. The jungle is a threatening exotic place that proves Jones' courage and strength, and the university is a place of high social status, proving his high social standing.

The mise en scene introduces the contrasting sides of Jones' character, and that it also helps to establish his status as "a superior being" who the audience will want to identify with. It does this in a number of ways eg. his relationship to the porters, to his enemies, to his competitors, and to his female students.

Also, an undergraduate essay should contain a bibliography, even if it only contains the film that's being studied as its sole reference. In truth, although the analysis is detailed and insightful, what the essay as a whole lacks is some of the critical distance that would have come from deeper research into mise en scene theory, and it is a pity that there are no other references or citations to put in the bibliography.

What I mean by "critical distance" is that there is no analysis whatsoever of the codes of race, class and gender that permeate the sequence described. The whole thing is composed of fantasy symbols that in one way or another construct the myth "ideal men penetrating exotic darknesses; men who are threatening to their enemies and irresistable to women".

It's crying out for a critical analysis of how and why films repeatedly represent powerful white men in threatening places filled with aliens and foreigners...