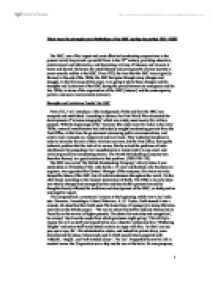 What were the strengths and limitations of the BBC during the period 1922-1939?

What were the strengths and limitations of the BBC during the period 1922-1939? The BBC, one of the largest and most effective broadcasting corporations in the present world, has proved a powerful force in the 20th century, providing education, entertainment and information, and fascinating millions of listeners and viewers at home and abroad. However, the establishment and early growth of every novelty is never smooth, neither is the BBC. From 1922, the time that the BBC was originally formed, to the end of the 1930s, the BBC had gone through many changes and struggle, In the following of this paper, I am going to show those changes and the strengths and limitations of the BBC during the period between its emergence and the late 1930s, in terms of the organisation of the BBC (internal) and the contemporary political and social environment (external). Strengths and limitations 'inside' the BBC First of all, I will introduce a little background of why and how the BBC was accepted and established. According to Seaton, the First World War stimulated the development of 'wireless telegraphy' which was widely used merely for military purpose. With the beginnings of the 'wireless' (the older name for radio) ...read more.

However, John Reith remained to be the General Manager of the corporation, and his administrative style remained too. "The BBC was more intentionally autocratic in its treatment of its own staff. Reith would banish rebels from the centre of the empire to the periphery. Indeed by 1937 the only doubts about the Corporation's monopoly were centred on the rights of its staff."(2003: p.122) A Staff Association was eventually set up in order to protect the BBC's staff and it was the first time the BBC's workers had an organized representation. On the other hand, women status in the BBC had been slightly improved between 1926 and 1936. According to the BBC's annual report, the number of women in creative position had increased and in administrative position had risen too. Even though most of the women were still secretaries, the proportion of female to male on the staff was described 'good'. As we can see from all above, during the period between 1922 and 1939, from the former BBC--the British Broadcasting Company to the new British Broadcasting Corporation, the limitation of the 'inside' BBC was the style Reith administrated the company -- brute, as a result his staff rarely had their rights to oppose his opinion or decision. ...read more.

But "Reith argued that if the BBC was taken over the strikers would merely close the service down." (2003: p.113) The BBC kept gaining its freedom from the government during the 1930s, but it could never completely obtain its independence due to the financial threat by government. Nevertheless, the BBC always maintained its principle as there were programmes involving political. Overall, the BBC had become from a 'private' business company to a model for the management of other national services and a useful institution for the society during 1922 and the late 1930s. Although it made no profits, its positive effect on the whole British public corporation was significant. Meanwhile, the BBC never stopped struggling for its independence from politics, though it was extremely difficult. In summing up, from 1922 to 1939, the strengths of the BBC were it had finished a massive modification: The scale of its institution had become larger, the respect of women had slightly improved and more importantly, it had become a public corporation served the whole nation. On the other hand, however, there were limitations as well: the BBC's staffs were still facing the problem of their rights protection and its political freedom ambition had not finally achieved. ...read more.