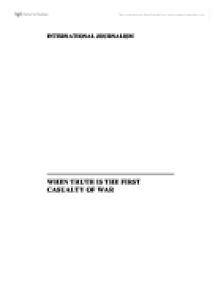 When Truth is the First Casualty of War

O'Shaughnessy argued that propaganda was inevitable because "when you wear the uniform you buy the values (2004)". CENSORSHIP The main external pressure on embedded journalists came in the form of military censorship. Embedded journalists were given unprecedented opportunities to cover combat operations close up, however the details of military actions could only be described in general terms. Journalists agreed not to write at all about possible future missions or about classified weapons and information they might find (Pfau etc al 2004). After signing a contract stipulating that they would not report missions in progress or their specific results, specific force sizes, or future missions, and that they would not travel in their own vehicles, reporters were free to join military units. As reporters could not travel independently, it meant that journalists could not really report independently either (Jensen 2003). With all interviews on the record, this actively discouraged military personnel from criticising any aspect of the war. Also, officers could censor copy and temporarily restrict electronic transmissions for "operational security" (Jensen 2003). Embeds routinely worked under censorship by withholding information that might expose them and coalition forces to Iraqi fire (Bell 2003). Another challenge to the fourth estate in the Iraq war was that many journalists only reported on a 'version' of the truth. ...read more.

Like the collapse of the Saddam Hussein regime in Iraq, the tenets of truth, objectivity and the ideals of the fourth estate also came under fire during "Operation Iraqi Freedom". CONCLUSION It is a widely held belief that 'truth is the first casualty of war'. The universal truism that the truth is inevitably distorted in times of war has been recurrently validated by the United States' 'war on terror' and in particular Operation Iraqi Freedom. The reportage of the Iraq War in 2003 has been at the forefront of ethical discourse because for the first time, 600 journalists were given unprecedented access to military operations and personnel. The concept of 'embedded journalists' poses several challenges because journalists living and working alongside the military present significant challenges to truth and ob jectivity on an operational level. This essay argued that the pursuits of truth and objectivity by embedded journalists are noble ideals, however they are difficult to achieve in practice. Beginning with definitions of embedded journalists, truth and objectivity, this essay explored the history of embedding journalists in earlier conflicts. Further to this discussion, the essay went on to explain how embedded journalists routinely, and often unconsciously, distort their news coverage with censorship and self-censorship. Finally, this essay illustrated how the use of embedded journalists in the Iraq war has seriously compromised the integrity of news coverage and ultimately served to perpetuate the maxim that 'truth is the first casualty of war'. ...read more.