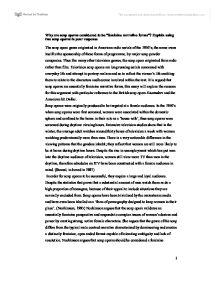 Why are soap operas considered to be &quot;feminine narrative forms&quot;? Explain using two soap operas in your response.

Why are soap operas considered to be "feminine narrative forms"? Explain using two soap operas in your response The soap opera genre originated in American radio serials of the 1930's; the name owes itself to the sponsorship of these forms of programme, by major soap powder companies. Thus like many other television genres, the soap opera originated from radio rather than film. Television soap operas are long running serials concerned with everyday life and attempt to portray realism and so to reflect the viewer's life enabling them to relate to the characters and become involved within the text. It is argued that soap operas are essentially feminine narrative forms, this essay will explore the reasons for this argument with particular reference to the British soap opera Eastenders and the American hit Dallas. Soap operas were originally produced to be targeted at a female audience. In the 1950's when soap operas were first screened, women were associated within the domestic sphere and confined to the home in their role as a 'house wife', thus soap operas were screened during daytime viewing hours. Extensive television studies show that in the winter, the average adult watches around thirty hours of television a week with women watching predominantly more than men. There is a very noticeable difference in the viewing patterns that the genders inhabit; they reflect that women are still more likely to be at home during daytime hours. ...read more.

The character Cindy Beal was the evil wife who committed adultery, kidnapped her children and attempted to kill her husband. More recently the current villainess in the soap is the character Janine Butcher who is forever scheming to destroy domestic happiness for personal satisfaction and gain. Viewers take much delight in despising the villainess, which argued by Moledski testifies to the enormous amount of energy involved in the spectators repression. Despite her being represented as an evil character, the villainess's power of manipulation over men particularly is an admirable attribute for the female viewer. (Moledski, 1997) Moledski also argues that another female stereotype is the 'ideal mother', a person who identifies with all her family members, has great sympathy for everyone and has no demands of her own. The good mother is her who gives advice which, although is comforting is rarely taken and she must sit by and watch helplessly as her child's life disintegrates. As the spectator we can also form this role of an ideal mother by being sympathetic to all characters because we have the ability to view all aspects of the situation. Therefore soap operas convince women that their highest goal is to promote family unity and happiness, whilst consoling them for their inability to bring about familial harmony. Moledski argues that soap operas 'serve to affirm the primacy of the family not by presenting an ideal family, but by portraying ...read more.

The press try and reinforce this image of the character 'Kat slater', making her more realistic by showing Jessie as being like her, in real life. According to Skirro, the identification between the actor and character is very important for the production team, who at casting stage must be aware of how the actor will carry the narrative image of the programme, for example, how they will be presented in the media in newspapers and appearences on the front cover of TV magazines. (Skirro, 1987) It has been argued by many feminist theorists that the soap opera does withhold an essentially feminine narrative form. The content, style and identifiable characters all attract the feminine gender and statistics support the notion that more women watch soap operas than men. However recent studies have shown more men are becoming increasingly interested in watching soap operas and despite higher viewing figures for women, men generally watch less television on the whole. It has been discussed what constitutes a male narrative form, and the interpretation of soap operas differs greatly to the perceived male narrative from the storylines to the nature of the genre. Soap operas reflect feminine perspective and identity, affirm women's power in society and represent a strong female gender, this binary opposition to the male narrative and the strong gendered features of the soap opera are the reasons as to why soap operas are considered to be 'feminine narrative forms'. Word count 2347 words in total 1 ...read more.