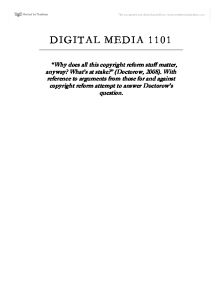 Why does all this copyright reform stuff matter, anyway? What's at stake? (Doctorow, 2008). With reference to arguments from those for and against copyright reform attempt to answer Doctorows question.

DIGITAL MEDIA 1101 "Why does all this copyright reform stuff matter, anyway? What's at stake?" (Doctorow, 2008). With reference to arguments from those for and against copyright reform attempt to answer Doctorow's question. This assignment will cover the question that Doctorow has asked, "Why does all this copyright reform stuff matter, anyway? What's at stake?" to try and answer this question I will look upon a few different examples and look at examples of people protecting and people breaking copyright law. What is Copyright? The Copyright, Designs and Patents Act 1988, is the current UK copyright law. This law is there so that people who create media texts have the right to control how their work is used. The rights that the creator has are, copying adapting, issuing, renting and lending copies to the public. Also usually the creator will have the right to be known as the author of the work. There is duration on the time that the work has a copyright, and there are some provisos on how long the media text is protected. Underneath is a table of duration of copyright. (The UK Copyright Service) For literary, dramatic, musical or artistic works 70 years from the end of the calendar year in which the last remaining author of the work dies, or the work is made available to the public, by authorised performance, broadcast, exhibition, etc. ...read more.

Now looking at this debate from an outsider, from Lars Ulrich's point of view it seems that all he is trying to do is control the use of his work and how they will have a legal battle with companies that try to stop the creators having control over their work. In May 2000 Metallica filed a lawsuit against the website Napster and the court ruled against napster who said that they weren't responsible for what the users of the software did and they complied with Metallica's requests and Napster banned 300,000 users. Later other music artists agreed with Metallica's decision to file a law suit and Napster was taken to court again because music artists were providing a means so that its users could infringe copyright laws, later that year Napster was shutdown. This is an example of the music wars at the beginning and the technological development in copying and sharing files just weren't advanced enough to stop people acting and fighting for their rights to copyright. Now as technology has advanced and the introduction of new file sharing technologies such as torrent software where people can easily distribute and download copyrighted material it is now impossible to sue or shutdown these sites. ...read more.

But most of these adaptations to copyrighted work will go unnoticed because it would cost more to enforce the laws in copyright than what the authors of the media text would be losing. But not all authors are that concerned about copyright laws and some even encourage the adaptation of their media text, this is where Creative Commons comes into play. This is a website that allows the author of a media text to partially copyright their work and is a big part and help in the remix culture that is now present today. People just visit their website and add the details of their work to the website and they give them a license and they can put a CC next to their work instead of the usual C. also they have a section on their website where you can look though different search engines and look at free work that can be used without copyright infringement. To sum up this essay I would like to say that the use of copyrighted material back in the late 90's early 00's would have been more punished but the introduction of new technologies has made it impossible to control the use of your work. Even if copyright becomes extinct people would still benefit from the social development in changing and getting more out of a media text. ...read more.