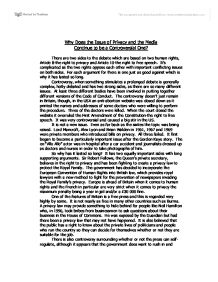 Why Does the Issue of Privacy and the Media Continue to be a Controversial One?

Why Does the Issue of Privacy and the Media Continue to be a Controversial One? There are two sides to the debate which are based on two human rights, Article 8-the right to privacy and Article 10-the right to free speech. It's complicated as the two rights oppose each other with important conflicting issues on both sides. For each argument for there is one just as good against which is why it has lasted so long. Controversy, when something stimulates a prolonged debate is generally complex, hotly debated and has two strong sides, as there are so many different issues. At least three different bodies have been involved in putting together different versions of the Code of Conduct. The controversy doesn't just remain in Britain, though, in the USA an anti-abortion website was closed down as it printed the names and addresses of some doctors who were willing to perform the procedure. Three of the doctors were killed. When the court closed the website it overruled the First Amendment of the Constitution-the right to free speech. It was very controversial and caused a big stir in the US. It is not a new issue. ...read more.

Following Calcutt's first report in 1990 the newspaper industry published a Code of Conduct and replaced the Press Council with the Press Complaints Commission (PCC) which would investigate any complaints made. Criticisms were made that there were too many newspaper employees on the Commission. They also didn't stick to the Code of Conduct. Clause seven stated that no unconsented photographs may be taken on private property unless in the public interest but this was broken almost immediately. They could also claim that just about anything was in the public interest. The Daily Mirror published photographs of Princess Diana in the gym. An invasion of privacy that is not in the public interest? Apparently not. The photos were printed to show how easy it was to endanger the Princess and the public have a right to know if their Princess is at risk, claimed the Mirror. After the death of Diana the Code of Conduct was revised and although the Princes William and Harry were left pretty much alone, other celebrities were not so lucky. In February 1998 Nicole Kidman was photographed leaving hospital after an operation even though a hospital is a supposed "private place". ...read more.

Even though editors insist that they are only thinking about the public all they really care about is sales and they will do anything to get them. If the opportunity to boost sales, in the form of an intrusive but juicy story, is available then the possibility of a complaint to the PCC isn't going to make much difference. The newspapers have unstable sales figures, which along with the price war means that editors really have to try to keep the circulation up. The newspapers are also a very powerful medium and can make or break a person's career especially if they have a dodgy past like John Profumo, who was exposed by a newspaper and never worked in politics again. Because of this politicians are reluctant to speak up, as they don't want to risk making enemies. We are now left waiting to see what effects the Human Rights Act will have and if this problem can ever be solved. But if the public continue to buy newspapers with these intrusive stories in them then they will keep being printed. If something is in demand someone will always be there to provide no matter what it is. One thing is for sure, that it will never become any less controversial because whenever one side comes up with a new argument the other has an equally good defending one. ...read more.