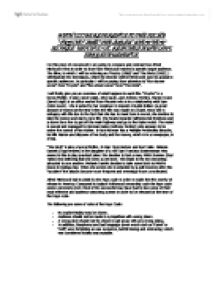 WITH CLOSE REFERENCE TO THE FILMS &quot;PSYCHO&quot; AND &quot;THE BIRDS&quot; SHOW HOW ALFRED HITCHCOCK REACHED A SPECIFIC TARGET AUDIENCE.

WITH CLOSE REFERENCE TO THE FILMS "PSYCHO" AND "THE BIRDS" SHOW HOW ALFRED HITCHCOCK REACHED A SPECIFIC TARGET AUDIENCE. For this piece of coursework I am going to compare and contrast two Alfred Hitchcock Films in order to show how Hitchcock reached a specific target audience. The films, to which I will be referring are 'Psycho (1960)' and 'The Birds (1963)', I will illustrate the techniques, which the director (Alfred Hitchcock) used to appeal to specific audiences. In particular I will be paying close attention to "the shower scene" from "Psycho" and "the school scene" from "The Birds". I will firstly give you an overview of what happens in each film. "Psycho" is a horror/thriller. It stars Janet Leigh, John Gavin, and Anthony Perkins. Marion Crane (Janet Leigh) is an office worker from Phoenix who is in a relationship with Sam (John Gavin). She is asked by her employer to deposit �40,000 dollars (a great amount of money at the time when the film was made) in a bank. Since she is unhappy with life due to the fact that she has to meet Sam in secret, she decides to take the money and start a new life. She heads towards California but tiredness and a storm force her to get off the main highway and go to the Bates motel. ...read more.

Suddenly the curtain is pulled back to reveal a darkened figure which appears to be of a woman. We get a close-up of Marion's face and then her mouth which shows her screaming in obvious terror. The now very famous music of the "screeching Violins" then begins and is similar to the sound of Marion's screaming which I think was deliberately done by Alfred to build tension, as I found it to have a greater effect than screaming alone would have had. The person attacks Marion and the sequence of alternating shots of the knife and Marion's body begins, accompanied by high pitched music and the sound of a knife ripping through flesh. Here the audience is required to use their imagination in order to picture the knife entering the body as Alfred Hitchcock was not allowed to show this, as I have already explained. The amount of tension finally reaches its climax as the rapid editing emulates the fast stabbing that takes place. This not only helps the viewer visualise what Alfred was not allowed to show but also helps build the tension and atmosphere required. We then see her fall out of the shower, as this happens she pulls down the shower curtain which shows the fact that she is trying to hang onto her life. ...read more.

He used the blue screen to merge the two films once he had shot them. However there was a problem with this as a white line appeared around the bodies which had been edited into the film. To eliminate this Alfred used sodium lighting. After reading and understanding the points that I have made it is evident that Alfred Hitchcock is a man of pure genius. He created thrillers which compete with modern day thrillers in the excitement and tension levels. A recent film poll showed "The Birds" and Psycho to be in the top 100 thrillers of all time with Psycho being at number 1. I think this is a huge achievement taking into consideration the fact that Alfred had much greater restraints placed on him by the Hays Code. He has created films which will be watched by generations to come simply because he achieved something which most people would think was impossible. He cleverly used editing and music to symbolise things that he could not legally show. Alfred Hitchcock himself sums up how he created such effective thrillers when he simply says: "I ensure that terror is accompanied by suspense". So basically Alfred Hitchcock reached a specific audience by staying within the limits of the rules and working around them where possible. The audience's imagination was of great help to him as he triggered it in scenes such as the shower scene from "Psycho". SHAZIB BIN ZAMAN 11K ...read more.