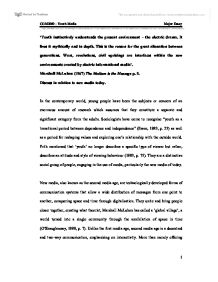 'Youth instinctively understands the present environment - the electric drama. It lives it mythically and in depth. This is the reason for the great alienation between generations - Discuss.

'Youth instinctively understands the present environment - the electric drama. It lives it mythically and in depth. This is the reason for the great alienation between generations. Wars, revolutions, civil uprisings are interfaces within the new environments created by electric informational media'. Marshall McLuhan (1967) The Medium is the Massage p. 9. Discuss in relation to new media today. In the contemporary world, young people have been the subjects or concern of an enormous amount of research which assumes that they constitute a separate and significant category from the adults. Sociologists have come to recognise "youth as a transitional period between dependence and independence" (Ewen, 1983, p. 23) as well as a period for reshaping values and exploring one's relationship with the outside world. Frith mentioned that 'youth' no longer describes a specific type of viewer but rather, describes an attitude and style of viewing behaviour (1993, p. 75). They are a distinctive social group of people, engaging in the use of media, particularly the new media of today. New media, also known as the second media age, are technologically developed forms of communication systems that allow a wide distribution of messages from one point to another, conquering space and time through digitalisation. They unite and bring people closer together, creating what theorist; Marshall McLuhan has called a 'global village', a world turned into a single community through the annihilation of space in time (O'Shaughnessy, 1999, p. 7). Unlike the first media age, second media age is a decentred and two-way communication, emphasising on interactivity. More than merely offering vast information and entertainment to the audiences, new media provide youths a self-identity, a sense of individuality and a way to think differently from the others. ...read more.

Not only so, analysing electronic games can also allow youths to develop fruitful insights about the meaning of interactivity. The most significant and extensive use of the computer is that of the Internet. By the mid 1990s, the Internet, said to be the "new era of the contemporary society" (Holmes, 1997, p. 33) emerged as the global computer network. In Australia, data shows that 57% of households with children have an Internet connection and people aged 18-24 years old are the largest group of Internet users (Australian Bureau of Statistics, 2000, p. 3). Young people are characterised as Internet users, using it to build identities. The Internet is a primary source of how youths perceive the world. Take for example; most of them have minimal idea of how a place looks like or what the culture is for a certain country. Such information is most likely to be gained through the Internet where information and pictures are available for one's access. On top of that, young people can now stay at home and get entertained with online movies, videos and music instead of going to the pubs and cinemas. Perhaps the most important and fastest growing part of the Internet is the World Wide Web (WWW). The idea of a WWW suggests a global network communication, bringing people from all over the world close together virtually. With the electronic mail, messages can be sent and received faster as compared to the traditional form of postal service. Research suggests that the use of the Internet will accelerate the creation of new cultures and new ways to view the world (Synder, 1997, p. ...read more.

9). More radically, new media of today may pose a danger to the traditional forms of media such as the print and television industries. This can eventually signal the slow death of the first media age. Lastly, globalisation understood as a "process in which complex interconnections are rapidly developing between societies, institutions, cultures and individuals worldwide" (Barr, 2000, p. 31) can result from the new media and create a stressful world where people may not be able to cope efficiently with rapid changes that new media has brought about. With the world simply out of one's control, the society can be in turmoil, threatened by nuclear war or catastrophes and civil uprisings. To conclude, I have discussed on the new media of today in relation to youth utilisation and the various adverse effects new media may have on youths and the society. Indeed, the new media play a pivotal role in youths' lives, helping the young population to see and identify themselves differently. With the introduction of new technological innovations, the lives of many young people have changed. To a remarkable degree, they plan their personal schedules to accommodate the new media of today. Truly, youths live in an electronically mediated environment whereby their society is constituted by the media. To end off my essay, I have asked myself this question: Are youths controlled by the new media or do they have the freedom and choice on how to utilize them? Having done much reading, I generally see that youths are controlled by the new media but through one's rationality and consciousness, they do have the ability to change things by making choices themselves. After all, they are the leading generation who will be engaging in the use of new media today. ...read more.