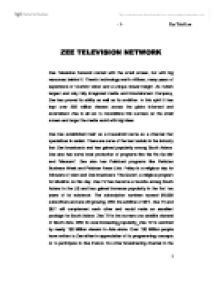 ZEE TELEVISION NETWORK Zee Television Network started with the small screen, but with big resources behind it. There's technology worth millions, many years of experience of futuristic vision and a unique viewer insight. As India's largest and only fully integrated media and Entertainment Company, Zee has proved its ability as well as its ambition. In this spirit it has kept over 225 million viewers across the globe informed and entertained. Zee is all set to consolidate this success on the small screen and target the media world with big ideas Zee has established itself as a household name as a channel that specializes in serials. There are some of the best serials in the industry that Zee broadcasts and has gained popularity among South Asians. Zee also has some local production of programs like 'Sa Re Ga Ma' and 'Mausam'. Zee also has Pakistani programs like Pakistan Business Week and Pakistan News Link. Friday is a religious day for followers of Islam and Zee broadcasts 'The Quran', a religious program for Muslims on this day. Zee TV has become a favorite among South Asians in the US and has gained immense popularity in the first two years of its existence. The subscription numbers exceed 50,000 subscribers and are still growing. With the addition of SET, Zee TV and SET will complement each other and would make an excellent package for South Asians. Zee TV is the numero uno satellite channel of South Asia. With its ever-increasing popularity, Zee TV is watched by nearly 180 Million viewers in Asia alone. Over 100 Million people have written to Zee either in appreciation of its programming concepts or to participate in Zee Events. No other broadcasting channel in the world could claim of such a rare distinction. In its efforts to reach out to the South Asian Diaspora across the world, Zee has launched its brand of programs in UK, USA, Africa, Fiji, and Mauritius. ...read more.

This is true especially for the Zee English which is currently broadcasting the 9th season of friends and other serials like Will and Grace; this is done in order to make regular viewers of Star World shift to watching Zee English. However since the cost of airing these serials are high zee has to break even by airing a large number of advertisements during the serial. This has actually caused many viewers to stop watching Zee TV > OPPOTRUNITIES Zee is going into the reality TV segment The latest trend in the west as well as now in India is REALITY TV. After star aired its own show of reality TV, zee is now quick to respond by starting its own reality TV series which will be more interactive with the audiences. Advertisements and revenues There is much more advertising on Star as compared to DD as advertisers feel their spending is more justified by advertising on one or more of the Star channels. Therefore there is an opportunity in this segment to in crease revenue further by attracting more advertisements and trying to capture DDs advertisers as well. Sales of televisions About 10 years ago most of the viewers of television were the urban population, however this population is only quarter of India's population. Nowadays the rural income being higher as compared to before the % increase of sales of TV sets is higher in the rural areas as compared to urban markets. Therefore more people are watching TV so there is more scope to earn higher revenue. Cable and satellite penetration For India cable and satellite was a phenomenon that occurred only about 12 years ago. This means rapid expansion of the market itself due to better infrastructure and towers being set up over the entire country. This means larger penetration of cable and satellite television, which gives star a chance to fragment and take up part of DDs market share. ...read more.

Friday is a religious day for followers of Islam and Zee broadcasts 'The Quran', a religious program channel in the world could claim of such a rare distinction. Zee delivers an exciting mix of entertainment, music, NEWS, public affairs, children's programming and more. Zee is the last word in quality television programming for South Asians in UK. Zee is committed to bringing quality shows and entertainment for everyone in the family and our commitment to quality service arid programming is second to none. "We are definitely looking at adding some more channels to the bouquet," Zee Turner chief executive Sunil Khanna said at a press conference to announce the launch of Trendz, a "global brand that is being built by Zee. To add to this, we also are in the process of launching a sports channel. This new channel will show case all sports events live. ...3 : 3 : Meanwhile, the international programming for Trendz - that would be 100 per cent to begin with - has been sourced from Video Fashion Network of the US and over a period of time Indian content too would be introduced, Khanna said. At the end Khanna added, " We know you , dear viewers, and that you prefer quality to quantity. But what if you could have both? We give you an increased number of channels. Also the latest episodes. While other channels like Star World is currently showing Friends Season 6, Zee English is airing season 9, which is the latest season. Also, Zee wants to bring back some of the programs of the past, due to popular demand. Shows like Seinfeld as well as new serials like Spin City, Just Shoot Me, Sex and the City will soon be aired on Zee.Hence at your request, dear viewers, bring you all these exciting program, and at little extra cost!!!" Grab a popcorn, make yourself comfy. Let Zee Network make your living room come alive. ???????????? ENDS CONTAC NAME : Ms Gillian Rosario Zee Television Network zeetelevision@vsnl.com - 1 - Zee Telefilms 1 1 ...read more.