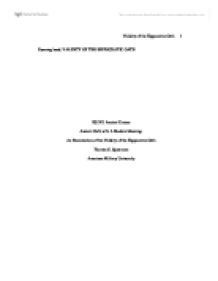 Ancient Oath with A Modern Meaning: An Examination of the Validity of the Hippocratic Oath.

Validity of the Hippocratic Oath 1 Running head: VALIDITY OF THE HIPPOCRATIC OATH HS 301 Ancient Greece Ancient Oath with A Modern Meaning: An Examination of the Validity of the Hippocratic Oath Thomas G. Spearman American Military University Validity of the Hippocratic Oath 2 One of the major changes to emerge out of the Greek Classical period was that of scientific inquiry into physical phenomenon. It occurred when Hippocrates embarked on a career in the healing arts over 2,400 years ago. His methods were decidedly scientific, relying upon observations which, when collated and analyzed, led to certain actions that could benefit patients. This was a watershed event in that it relied upon the cause and effect theory, rather than consultation of oracles or entreaties to gods for healing. Right and correct actions lead to positive and desirable results. This method made Hippocrates the innovator of his day. One innovation that stands out in particular was the creation of an oath that encompassed the practice of medical ethics. It wasn't the first code of medical ethics, but it certainly was and still is, the longest lasting. (Hammurabi, a Babylonian king, was probably the first; he devised a code that determined how many shekels were to be paid for physician services and which part of their bodies would be amputated if they killed the patient!) [McGraw-Hill, 1966]. This discussion will focus on the Hippocratic Oath, both ancient and modern, to determine why it was and still is, enduring. ...read more.

The tonality of each message couldn't be more similar. This, of course, was by design in that the modern version attempts to copy the intent while maintaining some semblance of relevancy. Each of the parts reflects the customs of the day. The covenant is constant pertaining to formal instruction, whether it be the "hard won scientific gains" or "to give a share of precepts and oral instruction". Each are key components to the art of medicine. The second halves of the oaths are more complicated, not only because of the bias mentioned earlier, in which the Pythagoreans put their spin on the oath, but that modern medicine has advanced so far, it is difficult to pick out the similarities. The ancient version puts so many limitations on physicians that today it would be deemed ridiculous. The Greeks were believers in the idea of "Essentialism", which was an evolutionary theory in that every living organism contained certain mixtures of the four elements (earth, air, fire, and water) called humours. The humours consisted of black bile, phlegm, yellow bile, and blood. If they weren't in balance with each other sickness was the result (Jason Frasco, Greek Medicine). That's why Hippocrates was one of the first to introduce diet as a means for healing. He used his knowledge of the humours in conjunction with diet to promote health. In fact, one could say he was one of the first to introduce preventative medicine. Hippocrates stipulates: To know the cause of a disease and to understand the use of the various methods by which disease may be prevented amounts to the same thing in effect as being able to cure the malady. ...read more.

I will not be ashamed to say "I know not," nor will I fail to call in my colleagues when the skills of another are needed for a patient's recovery. I will respect the privacy of my patients, for their problems are not disclosed to me that the world may know. Most especially must I tread with care in matters of life and death. If it is given me to save a life, all thanks. But it may also be within my power to take a life; this awesome responsibility must be faced with great humbleness and awareness of my own frailty. Above all, I must not play at God. I will remember that I do not treat a fever chart, a cancerous growth, but a sick human being, whose illness may affect the person's family and economic stability. My responsibility includes these related problems, if I am to care adequately for the sick. I will prevent disease whenever I can, for prevention is preferable to cure. I will remember that I remain a member of society, with special obligations to all my fellow human beings, those sound of mind and body as well as the infirm. If I do not violate this oath, may I enjoy life and art, respected while I live and remembered with affection thereafter. May I always act so as to preserve the finest traditions of my calling and may I long experience the joy of healing those who seek my help. Written in 1969 by Louis Lasagna, Academic Dean of the School of Medicine at Tufts University, and used in many medical schools today. ...read more.