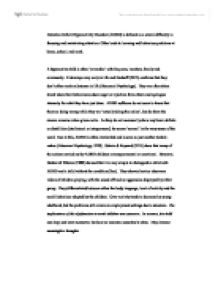 Attention Deficit Hyperactivity Disorder (ADHD) is defined as a severe difficulty in focusing and maintaining attention. Often leads to learning and behaviour problems at home, school, and work.

Attention Deficit Hyperactivity Disorder (ADHD) is defined as a severe difficulty in focusing and maintaining attention. Often leads to learning and behaviour problems at home, school, and work. A hyperactive child is often 'in trouble' with his peers, teachers, family and community. It develops very early in life and Denhoff (1973) confirms that they don't often reach milestones in life (Abnormal Psychology). They are often taken aback when their behaviours educe anger or rejection from others and apologise intensely for what they have just done. ADHD sufferers do not seem to know that they are doing wrong while they are 'actually doing the action', but do show the sincere remorse when given out to. As they do not necessarily show any basic deficits or disabilities (intellectual or interpersonal) he seems 'normal' in the very sense of the word. Due to this, ADHD is often overlooked and is seen as just another trouble-maker (Abnormal Psychology, 1978). Schain & Reynard (1975) show that many of the actions carried out by ADHD children as temperamental or emotional. However, Henker & Whalen (1989) showed that it is very simple to distinguish a child with ADHD and a child without the condition (Bee). They showed novice observers videos of children playing, with the sound off and no aggression displayed by either group. They differentiated between either the body language, level of activity and the social behaviour adopted by the children. Over-activity tends to decrease by young adulthood, but the problems still remain in employment settings due to structure. The implications of this dysfunction towards children are extensive. ...read more.

The National institute of Mental Health state that due to the a large amount of controversy over the medication used to treat ADHD, it is essential that the parents know all the benefits and risks of the stimulant drugs (www.nimh.nih.gov). Another method of treatment is that of behaviour modification. We view the normal activation of these systems (i.e. rewards and punishment) as being essential to the brains' capacity to process and store in the memory the feeling component of experience- pain like guilt and pleasure like joy. With no mechanism of conditioned expectancy developing in children with ADHD, they have little or no reflexive activation in the reward or punishment systems. Because of this a child can't anticipate the consequences of their actions. They have no internalisation of abstract concepts, moral or humanistic conscience. All due to this, the child feels no emotion when a significant other leaves their life, what only remains for them is emptiness. The behavioural modification method used towards very young children with this illness is on 'play therapy'. Toys and books, which are of interest to the child, is where therapeutic correction takes place. Positive behaviour is rewarded and negative behaviour is discouraged. There are home management programs associated with this treatment. It is like the reward /punishment theory. Good behaviour the child demonstrates is paired with him getting to experience good feelings, but disobedient is associated with bad. Here the therapist is like the parent. He nurtures and enculturates the child's life around them, teaching the parents also. However, this is a very long process and treatment must be continuous and one is obliged to wait until the brain matures and is capable of processing psychic feelings. ...read more.

* The child must show either significant 'inattention' or significant 'hyperactivity-impulsivity' (or both). * Inattention is indicated by any six of the following: 1) Often fails to give close attention to details or makes careless mistakes in schoolwork or other activities. 2) Often has difficulty sustaining attention to tasks or play. 3) Often does not seem to listen to when spoken to directly 4) Often does not follow through on instructions and fails to finish chores, homework or other duties. 5) Often have difficulty organising tasks and activities. 6) Often avoids, dislikes, or is reluctant to engage in tasks that require sustained mental effort. 7) Often loses things necessary for tasks or activities (e.g. toys, pencils, books, tools). 8) Is often distracted by extraneous stimuli. 9) Is often forgetful in daily activities. *Hyperactivity-Impulsivity is indicated by the presence of six of the following, persisting over a period of at least six months: 1) Often fidgets with hands or feet or squirms in seat. 2) Often leaves seat in classroom or in other situations in which remaining seated is expected. 3) Often runs about or climbs excessively and reports feelings of restlessness. 4) Often has difficulty playing quietly. 5) Is often 'on the go' or often acts as if 'driven by a motor'. 6) Often talks excessively. 7) Often blurts out answers before questions are completed. 8) Often has difficulty waiting turn. 9) Often interrupts or intrudes on others *The onset of the problem must be before the age of 7. *At least some of the symptoms must be present in two or more settings, such as at home and in school or school and play with peers. *The behaviour must interfere with developmentally appropriate social, academic or occupational functioning. ...read more.