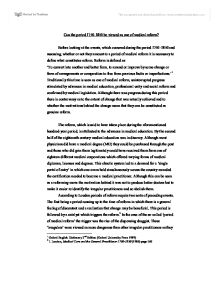 Can the period 1750-1850 be viewed as one of medical reform? Before looking at the events, which occurred during the period 1750-1850 and assessing, whether or not they amount to a period of medical reform it is necessary to define what constitutes reform. Reform is defined as: 'To convert into another and better form, to amend or improve by some change or form of arrangements or composition to free from previous faults or imperfections.'1 Traditionally this time is seen as one of medical reform, uninterrupted progress stimulated by advances in medical education, professional unity and social reform and confirmed by medical legislation. Although there was progress during this period there is controversy as to the extent of change that was actually achieved and to whether the motivations behind the change mean that they can be constituted as genuine reform. The reform, which is said to have taken place during the aforementioned hundred-year period, is attributed to the advances in medical education. By the second half of the eighteenth century medical education was in disarray. Although most physicians did have a medical degree (MD) they could be purchased through the post and those who did gain them legitimately could have received them from one of eighteen different medical corporations which offered varying forms of medical diplomas, licenses and degrees. ...read more.

Despite crippling competition the one thing with general practitioners yearned for more than anything was professional respectability and an institution to represent their views1. Again reform was set in motion. The creation of the National Association of General Practitioners in 1845 was established in the hope that it, and other associations like it which were also been established, would lead to the creation of a College of General Practitioners. An agreement that this college should be established as signed, after five years of setbacks, by all heads of the medical corporations was rejected at the last minute by the Royal College of Surgeons. At the same time they ended any petitions by general practitioners for some years. This is another example of failed reform due to the attitude of the Royal Colleges. Despite blocking of reforms by the Royal College they could not prevent the rise of the general practitioner. The mid nineteenth century is often termed as giving rise to the cult of the family doctor.1 It was at this time that medical practitioners became a family figure and a prominent man in a town or village. General Practitioners looked towards the model of the family doctor which was to become the backbone of British medicine. ...read more.

to be both an ethical and legal watchdog with the power to bring those responsible for malpractice to call. Despite this act appearing to represent reform it mirrored the 1815 Apothecaries Act as critics disowned it as a reform as it essentially confirmed the status quo. The GMC was dominated by the colleges, unlicensed practise continued to be lawful and physicians and surgeons continued to strengthen their positions. Although the act changed things it did not free it from previous faults or imperfection and therefore is not a document of reform. My personal view is that, as is the belief of Loudon the medical reform actually began later than 1750, Wear proposes 1794, and ended later than 1850 with the Medical Act Amendment Act 1886. I also believe that although there was reform in some areas such as education and regulation, the period was more about laying the foundations for future advances than it was reform. The period cannot be seen as pure reform as although there was a determination to improve standards of medical education and care it was inextricably linked with personal ambition and aspirations towards professional, social and financial success and respectability.1 Despite the continuing debate as to whether or not the events of this period constitute reform what is certain is that the period marked, what Wear calls, 'a watershed between a low plateau in the eighteenth century and the beginning of modern medicine. ...read more.