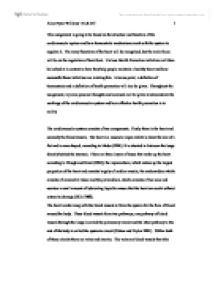 This assignment is going to be based on the structure and function of the cardiovascular system and how homeostatic mechanisms work with the system to regulate it. The many functions of the heart will be recognised, but the main focus will be on the regulation of heart beat. Various Health Promotion initiatives will then be looked at in context to how they help people maintain a healthy heart and how successful these initiatives are in doing this. At some point, a definition of homeostasis and a definition of health promotion will also be given. Throughout the assignment, my own personal thoughts and accounts will be given to demonstrate the workings of the cardiovascular system and how effective health promotion is in reality. The cardiovascular system consists of two components. Firstly there is the heart and secondly the blood vessels. The heart is a muscular organ which is about the size of a fist and is cone shaped, according to Mader (2006). It is situated in-between the lungs directly behind the sternum. There are three layers of tissue that make up the heart according to Waugh and Grant (2006); the myocardium, which makes up the largest proportion of the heart and consists largely of cardiac muscle; the endocardium which consists of connective tissue and the pericardium, which consists of two sacs and secretes a small amount of lubricating liquid to ensure that the heart can work without extensive damage (Hills 1988). The heart works along with the blood vessels to form the system for the flow of blood around the body. These blood vessels form two pathways; one pathway of blood vessels through the lungs is called the pulmonary circuit and the other pathway to the rest of the body is called the systemic circuit (Cohen and Taylor 2005). Within both of these circuits there are veins and arteries. The veins are blood vessels that take blood towards the heart and the arteries take blood away from the heart (McCall and Tankersley 2007). ...read more.

They have many heart health initiatives in place, with some being at least 30 minutes of exercise, five days a week, eating healthily such as five portions of fruit and vegetables a day and reducing high fat intake. The rationale behind reducing a high fat intake is to reduce the amount of cholesterol in the body. Daniels (2002) suggests that a high fat intake can cause high cholesterol which in turn can lead to atherosclerosis, and Null (2006) suggests that a high fat diet can lead to hardening of the arteries. A low cholesterol diet can reduce the chances of a person developing coronary heart disease (British Heart Foundation 2008). Cholesterol is a waxy fat that travels around the body via the bloodstream (Freeman and Junge 2005); but it is not always bad for the body. Cholesterol plays a vital part in many cellular functions (Pottle 2007). The positive and negative effects of cholesterol all depends on what type of fat is mainly eaten in a person's diet. If a person was to have a high saturated fat intake, then this could lead to an increase in the amount of low density lipoproteins (LDL) in there blood stream (Institute of Medicine 2005); lipoproteins being made up of cholesterol and protein. These 'bad' LDL's carry cholesterol around in the blood stream and deposit it in cells. This is what can cause the build up of an atheroma, an abnormal growth of cholesterol, within the arteries which can lead to atherosclerosis (Faergeman 2003). It is fats such as monounsaturated fat that is good for the body. This is found in foods such as nuts, seeds and olive oil. Monounsaturated fats's help lower LDL in the bloodstream and keep High density lipoproteins (HDL) at a stable level within the body (British Heart Foundation 2007). It is these HDL's that carry any surplus cholesterol out of the bloodstream back to the liver for excretion, which means that the fat is not deposited in the arteries (McArdle et al. ...read more.