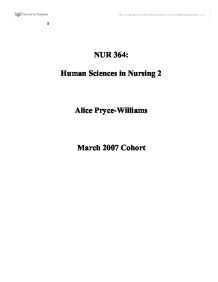 NUR 364: Human Sciences in Nursing 2 Alice Pryce-Williams March 2007 Cohort Human Sciences in Nursing 2 This assignment is going to explore how biological, psychological and social factors of a person's life may impact upon their health status. This will be done by including a detailed patient profile of Jane, a 55 year old patient, who suffered a myocardial infarction (MI) and was nursed in an acute hospital setting. The altered physiology that occurred as a result of the MI will be looked at with consideration to psychosocial factors that may have contributed to the patient's illness. MI is one of the most common manifestations of CHD according to Todd (2008) and so Jane's main risk factors for the development of coronary heart disease (CHD) will be identified, with particular attention on the issue of smoking. How smoking may have contributed to the cause of an MI will then be explored, with an analysis of the factors that may have influenced Jane taking up smoking. The main factors that will be looked at will be how living in a low social economic household gives more chance of becoming a smoker, and how influences from family and peers may trigger smoking behaviour. Government interventions such as the smoking ban will then be looked at, and how National Service Frameworks (NSF) have been put in place to tackle the high numbers of CHD, as the disease accounts for almost a third of all smoking related deaths in Britain (Royal College of Physicians 2000). Confidentiality will be respected throughout the assignment since the Nursing and Midwifery Council (NMC) (2008) states that a persons right to confidentiality must be respected at all times and so for this reason, any names used will be changed and the location of the care provided will not be recognisable. The concept locus of control and the sick role model will be looked at in relation to Jane's health behaviour and beliefs and brief descriptions will be given of the two. ...read more.

However, Jane stated that she had other worries apart from smoking such as how her life will be affected by having a MI. Her main worries were that she could not go back to work, would struggle getting back in to her old routine and also the risk of another MI. Jane was assured that she would receive cardiac rehabilitation, and would have support and advice following her discharge from hospital. Through Jane suffering a MI and been admitted to hospital, she has been deemed to have taken on the sick role. The sick role concept was developed by Talcott Parsons, a sociologist who believed that individuals adopt a socially defined role when they become sick, in which there are privileges and obligations attached to it (Denny and Earle 2005). Parsons believed that sickness was a social phenomenon, in which rules about been sick had to be strict in order to prevent a strain on society (Porter 1998). It is a deviant state from society in which persons take to depart form normal activity and behaviour, but in order to fit legitimately into this role, there is certain criteria that must be fulfilled (Williams et al. 1998). The person is expected to be motivated to get better as soon as possible, seek help from a professional and comply with the treatment, otherwise the privileges that come with been sick, of been exempt from everyday responsibilities and not been held accountable for their illness, will be taken away (Taylor and Field 2007). In Jane's illness, it can be seen that she has legitimately fitted the criteria of the sick role as she has sought professional help, complied with the treatment given to her when she was admitted to the accident and emergency unit and she has so far, been motivated to get better. This means that Jane has been entitled to the rights that come with being ill and so she can withdraw from her job as a health care worker, her normal role at home and any other responsibilities she may have until she is deemed to be better. ...read more.