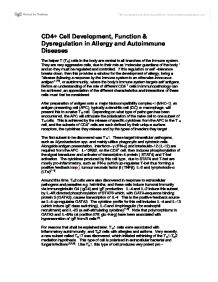 CD4+ Cell Development, Function & Dysregulation in Allergy and Autoimmune Diseases The helper T (TH) cells in the body are central to all branches of the immune system. They are very aggressive cells, due to their role as 'molecular guardians of the body' and so they must be regulated and controlled. If this regulation or self-tolerance breaks down, then this provides a window for the development of allergy, being a "disease following a response by the immune system to an otherwise innocuous antigen" [12], or autoimmunity, where the body's immune system targets self antigens. Before an understanding of the role of different CD4+ cells in immunopathology can be achieved, an appreciation of the different characteristics and interactions of these cells must first be considered. After preparation of antigen onto a major histocompatibility complex-II (MHC-II), an antigen presenting cell (APC), typically a dendritic cell (DC) or macrophage, will present this to a naive TH cell. Depending on what type of pathogen has been encountered, the APC will stimulate the polarisation of the naive cell to one subset of TH cells. This is achieved by the release of specific cytokines from the APC to the TH cell, and the subsets of CD4+ cells are each defined by their unique surface receptors, the cytokines they release and by the types of invaders they target. The first subset to be discovered was TH1. These target intracellular pathogens, such as Mycobacterium spp. and mainly utilise phagocytic and cytotoxic cells. Alongside antigen presentation, interferon- ? ...read more.

In X-linked immunodeficiency polyendocrinopathy enteropathy (IPEX), Foxp3 has a frameshift mutation, leading to fatal autoimmunity, usually by a TH2 hyperactivity related condition. As Foxp3 functionality is a non-redundant requirement for Tregs, this highlights the importance of TH regulation to avoid autoimmunity and/or allergy[2,6,9]. These pathways all reveal a very stringently controlled system, and this is for a reason. In the collapse, or bypass of this system, abnormal activity of CD4+ cells can have detrimental effects on the body, even to the point of fatality. Using the above example as a starting point, TH2 dysregulation typically is associated with allergy. Their production of IL-5 recruits eosinophils, and IL-4 and IL-13 induce class switching to IgE[2]. These then bind to Fc?RI located on mast cells and basophils, activating them. This is called sensitisation and upon exposure to the allergen the immunoglobulin recognises, these cells degranulate releasing histamine and heparin[10,11]. Alternative macrophages accompany in this condition, and can release more cytokines exasperating the allergic situation. Such cytokines include IL-25, IL-33, TSLP and IL-9. Recruited eosinophils produce IL-25, promoting TH2 function. This increases IgE levels and mucin production by goblet cell metaplasia for example. IL-33 acts in the same way. The allergenic role of IL-9 highlights the problem with dysfunctioning of Treg cells, as TH2 induction to TH9 has been mentioned as a mechanism used for alleviation of TH2 activity. IL-9R is present on basophils, and so their activation by IL-9 from TH9 cells results in the expansion of the TH2 population, and it also increases activity of eosinophils, due to the cytokines that activated basophils release[8,10]. ...read more.

LPS can also aggravate autoimmune conditions, such as in Crohn's disease, as the secretion of pro-inflammatory IL-22 results from TLR activation by LPS[5,6]. High levels of iTreg cells are detectible in autoimmunity, but they are unable to quell the proliferation and activity of the inflammatory TH1 and TH17 cells, despite releasing high levels of SOCS3 which inhibits IL-23. This is due to overwhelming levels of IL-6, TNF? and DC activation of cells. Even complete removal of TGF� doesn't provide resistance, as although TH17 cells are no longer present, there is now a lack of Tregs. This allows severe hyperactivity of both TH1 and TH2 cells, resulting in 100% mortality in mouse models[1,5,6]. What is obvious from the study of this topic is that TH cell dysregulation is not solely responsible for autoimmunity and allergy. Of course the breakdown of tolerance, and regulation are severally detrimental, but genetic susceptibility regarding MHC phenotypes, such as HLA-DR3 and HLA-DR4 in type 1 diabetes mellitus, must also be considered. Beyond this, environmental factors outside of the body's control, innate cell activity, APC activity, the characteristics of the cells to which the allergic or autoimmune condition is localised, and many other factors all play a role in the development of hypersensitive conditions. The only true inference that can be taken from this information is that despite strong associations of certain cells with specific conditions, no one single cell is responsible for a condition. TH2 are accompanied by TH17 in allergies, and TH17 by TH1 and TH2 in autoimmunities, just showing how the only common feature throughout all of these conditions is that they all involve immensely complex and potent processes, many cells and no simple answers. ...read more.