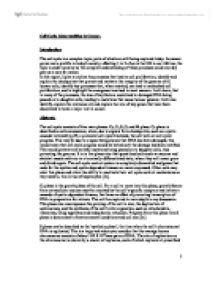 Cell Cycle Abnormalities in Cancer. Introduction The cell cycle is a complex topic, parts of which are still being explored today. As cancer grows more prolific in today's society, affecting 1 in 3 of us in the UK in our lifetime, the topic is under scrutiny as the complete understanding of these processes could one day give us a cure for cancer. In this report, I plan to outline the processes that lead to cell proliferation, identify and explain the checkpoints that protect and maintain the integrity of the genome of all human cells, identify key processes that, when mutated, can lead to unchecked cell proliferation, and to highlight the oncogenes involved in most cancers. I will show, that in many of the processes, the loss of key factors could lead to damaged DNA being passed on to daughter cells, leading to mutations that cause tumour genesis. I will also identify, explain the relevance of, and explain the role of key genes that have been discovered to have a major role in cancer. Abstract. The cell cycle consists of five main phases: G0, G1, S, G2 and M phase. G0 phase is described as cells senescence, when, due to signals from checkpoints, such as a cyclin cascade initiated by p53, a prevalent cell cycle blockade, the cell halts all cell cycle progress. This may be due to a signal being shown that DNA has been damaged; this would mean that cell cycle progress would be halted until the damage had been rectified. This would prevent any harmful mutations being passed on to daughter cells, thus protecting the genome. It is in this phase also that specialised cells such as neurons and skeletal muscle cells are in a terminally differentiated state, where they will never grow and divide again. The cell-cycle control system is completely dismantled and genes that code for the cyclins and cyclin dependent kinases are never expressed. ...read more.

and APAF-1 [2f]. The function of apoptosis or programmed cell death is the protect the rest of the cellular community from the negative effects of dysfunctional cell behaviour or DNA damage. This is a vital function in the prevention of cancer and if the p53 gene is lost, this suicide of harmful cells cannot occur. G2/M phase progression. As stated in the description of the G2 DNA checkpoint, the cyclin-dependent kinase Cdk1 has a major role in inducing the transition of a cell into M phase. Cyclin B1 accumulates in the cell as it is synthesized at all stages of the cell cycle but its degradation decreases and synthesis increases at G2 and M phase [1a]. As the cell approaches mitosis, cyclin B1 and Cdk1 combine to form the complex that drives entry into M phase. This complex is actively phosphorylated by the enzyme CAK and simultaneously inactivated by phosphorylation by the protein kinase Wee1, leaving it in a state that it is 'primed' and ready for action. [2e] At a critical point in late G phase, the protein phosphatase Cdc25 removes the inhibitory phosphate placed on the complex by Wee1 and simultaneously inhibit the action of Wee1. The CDC25 phosphatase is activated by the cyclin B1/Cdk1 complex itself, in a positive feedback loop, and also by the protein kinase Polo kinase[1a]. The positive feedback loop allows the rapid activation of the complex, so as more active complex is produced, more can be induced to the active state. The active cyclin B/Cdk1 complex is thought to initiate mitosis by phosphorylating the condensing protein complex, a protein group required for the condensation of the chromosomes in frog oocytes [1a]. The cyclin A/Cdk2 complex is also thought to have a role in changing the stability of the microtubules and chromosome condensation [2e]. The Spindle Assembly checkpoint. Mitosis has 7 main phases: prophase, prometaphase, metaphase, anaphase A, anaphase B, telophase and cytokinesis. ...read more.