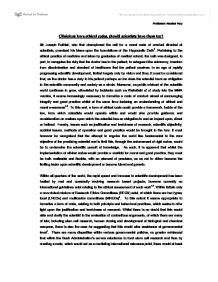 Clinicians have ethical codes, should scientists have them too?

Clinicians have ethical codes, should scientists have them too? Sir Joseph Rotblat, who first championed the call for a moral code of conduct directed at scientists, premised his ideas upon the foundations of the Hippocratic Oath1. Pertaining to the ethical practice of medicine and taken by graduates of medical school, the oath was designed, in part, to recognise the duty that the doctor has to the patient; to safeguard the autonomy, freedom from discrimination and standard of healthcare that the patient receives. In an age of rapidly progressing scientific development, limited largely only by vision and time, it must be considered that, as the doctor has a duty to his patient perhaps so too does the scientist have an obligation to the scientific community and society as a whole. Moreover, as public mistrust of the scientific world continues to grow, stimulated by incidents such as Wakefield et al study into the MMR vaccine, it seems increasingly necessary to formalize a code of conduct aimed at encouraging integrity and good practice whilst at the same time fostering an understanding of ethical and moral awareness2,3. To this end, a form of ethical code could provide a framework, inside of the law, from which scientists would operate within and would also provide guidance and consideration on matters upon which the scientist has an obligation to and an impact upon, direct or indirect. ...read more.

To this extent a code also under the framework of ethical principle would attempt to invoke a degree of altruism, perhaps already present but not at the fore, within scientists. Indeed, Sir David King, the Chief Scientific Adviser to the UK Government, has called for a 're-think of priorities in science and technology', highlighting the four billion spent on the Large Hadron Collider as a gross mismanagement of both funding and concern11. Issues such as poverty in Africa, the pandemic of HIV/Aids, the depletion of fossil fuels and global warming are all extremely important matters which must be addressed for the sake of the future of the planet and the human species. Therefore by establishing an atmosphere that encourages the discussion of issues that science raises for society, scientists of all nature, will be in a far better position to actively seek to find solutions to such problems12. Due to the fact that the actions of the scientist can have significant implications, it seems imperative that the nature of their work operates in a way which is not harmful, or at least heavily minimised, to the human population, animals or the environment and at the same time, that the scientist acknowledges some degree of responsibility for the consequences of their actions. ...read more.

In particular, North Korea's Human Rights violations can be identified as to why a small minority of countries would be unwilling to introduce any proposed system of codes into their scientific organisations, whilst similarly the actions of Harold Shipman, supposedly regulated by the GMC, point to the fact that, even if introduced, ethical codes for scientists will not mark a complete turning-point for the ending of all unethical practices. In addition there remains the matter of how to relate ethical codes to scientists working in industries such as tobacco production. In conclusion, it is apparent that whilst the introduction of ethical codes would certainly not systematically result in the ceasing of all unethical practices, it would have a largely positive influence upon matters such as justification and lawfulness of research, scientific objectivity, societal issues, methods of operation and good practice. Moreover, the formalisation of a system of codes would also be likely to have the added effect of creating an atmosphere within the working environment wherein qualities such as integrity and honesty would be brought to the fore. As such it seems appropriate to formalise a system of codes, which is perhaps all the more urgently needed given the current rapid progress of scientific development, based on principle, ethical and behavioural practices, for scientists. ...read more.