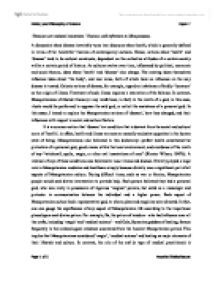 'Diseases are cultural constructs.' Discuss with reference to Mesopotamia.

'Diseases are cultural constructs.' Discuss with reference to Mesopotamia. A discussion about disease invariably turns into discourse about health, which is generally defined in terms of the 'scientific' theories of contemporary cultures. Hence, notions about 'health' and 'disease' tend to be cultural constructs, dependent on the collective attitudes of a certain society within a certain period of history. As cultures evolve over time, influenced by political, economic and social factors, ideas about 'health' and 'disease' also change. The existing ideas themselves influence ideas about 'the body', and vice versa; both of which have an influence on the way disease is treated. Galenic notions of disease, for example, regard an imbalance of bodily 'humours' as the origin of illness. Treatment of such illness requires a restoration of the balance. In contrast, Mesopotamians attributed illness (or any misfortune, in fact) to the wrath of a god; in this case, rituals would be performed to appease the said god, or solicit the assistance of a personal god. In this essay, I intend to explore the Mesopotamian notions of 'disease', how they changed, and their influences with respect to social and cultural factors. It is a common notion that 'disease' is a condition that is deviant from the social and cultural norm of 'health'; in effect, health and illness are seen as mutually exclusive opposites in the human state of being. ...read more.

In Th�rapeutique m�sopotamienne, Herrero makes the assertion that the difference between the curative techniques of an as� and a�ipu depends on the way the nature of the illness is understood (Sarlock, 1999). If we impose our current understanding of illness upon the sources we interpret, we misrepresent the Mesopotamian construction of disease. The sources from which we gather our evidence are themselves cultural constructs. We depend upon cuneiform tablets, specifically a rich corpus of medically related texts, to provide valuable insights into the nosology of the area (CDLI, 2003). Our interpretations aside, there are many ways in which these cuneiform tablets record the Mesopotamian notion of disease and health. Firstly, we should note that - as with any archaeological text - there are vested interests behind the production of a document containing a 'standardised' body of knowledge. Certainly in the Old Babylonian period, there was a royal obligation to manage the well being of a kingdom and its people. The variety of professionals (for example, as�s and a�ipus) involved in healthcare included scholars who informed their opinion and practice of healthcare from medical literary texts. Further observations, amendments or novel ideas within the realm of medicine would be recorded onto cuneiform tablets and, depending on royal patronage, slowly incorporated within influential collections of medical works. These scholars would often be a�ipus, who were known to be literate and frequently acted as scribes. ...read more.

During these times, the as� had greater influence amongst everyday notions of disease, but not necessarily in the courts nor amongst the intellectual elite. Conversely, a dependence on gods and goddesses was so deeply interwoven into Mesopotamian culture, that an a�ipu might also have greater influence, with his strong links to divinity. Consequently, the socio-economic status of an ancient culture may also influence widespread concepts of disease. Any information on how Mesopotamians conceptualised disease gives us important information on Mesopotamian culture. The importance of a divine origin to disease, the method of payment for its treatment, and the diagnostic warning signs an as� or a�ipu might consider, all provide interesting and rare openings to the Mesopotamian culture across two millennia. Our notions of disease belong to our contemporary culture and reflect our current beliefs; imposing ideas from the twenty-first century upon a culture that began four thousand years ago, is hardly sensible for scholarly research. If we cannot separate as� from a�ipu, it is probably because we are looking for binary opposites where there are none (Sarlock, 1999). Even the Mesopotamian anatomical and disease terminology also belong to the culture from which they originate; by using them when we talk about Mesopotamian medicine, allows us to explore the links between language and lifestyle, thereby revealing even more about Mesopotamian culture. ...read more.