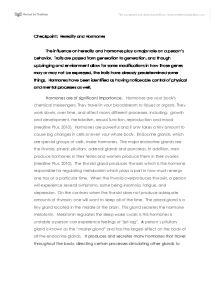 Checkpoint: Heredity and Hormones The influence on heredity and hormones play a major role on a person's behavior. Traits are passed from generation to generation, and though upbringing and environment allow for some modifications in how those genes may or may not be expressed, the traits have already predetermined some things. Hormones have been identified as having noticeable control of physical and mental processes as well. Hormones are of significant importance. Hormones are your body's chemical messengers. They travel in your bloodstream to tissues or organs. They work slowly, over time, and affect many different processes, including: growth and development, metabolism, sexual function, reproduction and mood (Medline Plus, 2010). Hormones are powerful and it only takes a tiny amount to cause big changes in cells or even your whole body. Endocrine glands, which are special groups of cells, make hormones. The major endocrine glands are the thyroid, pineal, pituitary, adrenal glands and pancreas. In addition, men produce hormones in their testes and women produce them in their ovaries (Medline Plus, 2010). The thyroid gland produces thyroxin which is the hormone responsible for regulating metabolism which plays a part in how much energy one has at a particular time. ...read more.

Both of these conditions affect the kidneys. Diabetes insipidus is different from the more well-known diabetes mellitus (including type 1 and type 2 diabetes), which affects the levels of glucose in our bodies. The last two hormones secreted by the pituitary are Luteinizing hormone (LH) which regulates testosterone in men and estrogen in women and Follicle-stimulating hormone (FSH) which promotes sperm production in men and stimulates the ovaries to enable ovulation in women. Luteinizing hormone and follicle-stimulating hormone work together to cause normal function of the ovaries and testes (The Hormone Foundation, 2010). The adrenal gland is responsible for a person's reaction to stress, releasing hormones that you can't live without, including sex hormones and cortisol, which helps you respond to stress and has many other functions. During periods of stress the brain signals the adrenal glands to produce epinephrine or "adrenaline". Epinephrine increases the rate in which the heart beats. The increased cardiac output supplies more oxygen to the muscles, putting the body in a heightened state to react. As a longer term response to stress, cortisol is secreted by the adrenal glands, promoting the release of energy (Medline Plus, 2010). ...read more.

The goal of research in evolutionary psychology is to discover and understand the design of the human mind. Evolutionary psychology is an approach to psychology, in which knowledge and principles from evolutionary biology are put to use in research on the structure of the human mind (Center for Evolutionary Psychology, 2009.) Evolutionary psychologists see the mind as being "hardwired" and that humans are predisposed to think and act a certain way (Morris & Maisto, 2005). They also contend that these predispositioned behaviors evolved hundreds of thousands of years ago. By studying things like language, parenting, happiness, sexual attraction, and violence and by studying these things in different times, habitats, cultures and among the sexes evolutionary psychologists seek to understand the basic programs that guide thinking and behavior (Morris & Maisto, 2005). The factors that influence behavior are hormones, genetics, and environment. Of these factors, we can only control one of the three. Environment is a controllable variable while heredity and hormones are not. Though evolutionary psychology argues that environment and evolution have predetermined our behavior, genetics tends to disagree. Behavior genetics shows us that genes and the physical process of the body's hormones can have a significant effect on mood and behavior. Somewhere is the middle is probably a common ground where all three contribute to our behavior. ...read more.