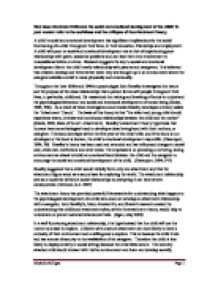 How does attachment influence the social and emotional development of the child? In your answer refer to the usefulness and the critiques of the attachment theory.

(Davenport, 1994, P15- 17) Critics of Bowlby's theory say that Bowlby may have overlooked many other variables that may have contributed to the reason for the Juveniles delinquent behaviour, including the reasons for the separation in the first place and what happened after the separation. The relationship that a child builds with a caregiver can be adversely affected due to the care that the child is given from birth. Studies have revealed that raising children in institutions have great adverse effects on the emotional and social development of the child. In the 1930's David Levy spoke of children in New York Founding Hospital "These children, though often pleasant on the surface, seemed indifferent underneath". He questioned whether there could be a "deficiency disease of the emotional life, comparable to a deficiency of vital nutritional elements within the developing organism" (Karen R, 1998, P13) The lack of proper individual attention, care and stimulation has extremely negative effect on the child. Studies showed that children placed in an orphanage within the first six months of their life displayed normal behaviour, smiling at the caregiver and crying for attention. Research suggests that babies have a genetic tendency to cry and look for attention and comfort to meet their needs. When the needs are not met the child may regress and stop looking to the caregiver for fulfilment of its needs. The child gradually interacts less and less with the caregiver as they began to realise their attempts for attention will not be met. This was described by Joyce Robertson as three stages, from distress, through despair, to detachment. (Davenport, 1994, P21) ...read more.

This means they encourage only interaction between the child and the adoptive parents for the first weeks of the placement in order to encourage an attachment to form with the caregiver. The reason for this is the social workers realise that a bond must be formed. If a child is exposed to several caregivers and from multiple bonds it may cause confusion and lead to developmental delay. In Belarus there are many 'social' orphans, where by their biological families may be living but their parents have their rights removed by the courts. Invariable, there has been massive trauma in the family. This does pose the question if the children are void of affection and incapable of social development due to previous trauma and circumstances rather than lack of attachment. In light of this evidence, it is obvious that every infant and young child should have at least one principal caretaker who can and will provide the unconditional love necessary for normal emotional and social development. This is clearly a tremendous task, and society is probably not yet read, or able, to provide such care. Yet while it may be impossible in our world society to assure a loving caregiver for every infant and child, the desirability, indeed the necessity, of doing so must be recognized, and steps taken toward its achievement. The attachment theory is useful in order to understand why a bond is necessity and the recognition of this can be used by caregivers to assist in the recovery of the child if they have never developed a healthy attachment relationship. ...read more.