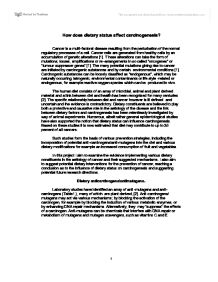 How does dietary status affect carcinogenesis?

How does dietary status affect carcinogenesis? Cancer is a multi-factoral disease resulting from the perturbation of the normal regulatory processes of a cell. Cancer cells are generated from healthy cells by an accumulation of genetic alterations [1]. These alterations can take the form of mutations, losses, amplifications or re-arrangements in so called "oncogenes" or "tumour suppresser genes" [1]. The many potential mutations giving rise to cancer are initiated by carcinogenic substances and by certain environmental conditions [1]. Carcinogenic substances can be loosely classified as "endogenous", which may be naturally occurring, iatrogenic, environmental contaminants or life style-related or endogenous, for example reactive oxygen species which can be produced in vivo. The human diet consists of an array of microbial, animal and plant derived material and a link between diet and health has been recognised for many centuries [2]. The specific relationship between diet and cancer however is ill defined and uncertain and the evidence is contradictory. Dietary constituents are believed to play both a protective and causative role in the aetiology of the disease and the link between dietary factors and carcinogenesis has been relentlessly investigated by way of animal experiments. Numerous, albeit rather general epidemiological studies have also supported the notion that dietary status can influence carcinogenesis. Based on these studies it is now estimated that diet may contribute to up to 35 percent of all cancers. Such studies form the basis of various prevention strategies, including the incorporation of potential anti-carcinogens/anti-mutagens into the diet and various dietary modifications for example an increased consumption of fruit and vegetables. In this project I aim to examine the evidence implementing various dietary constituents in the aetiology of cancer and their suggested mechanisms. I also aim to suggest potential dietary interventions for the prevention of cancer, reaching a conclusion as to the influence of dietary status on carcinogenesis and suggesting potential future research directions. Dietary anticarcinogens/antimutagens. ...read more.

Most studies assess the effects of fibre-rich foods. Such foods are typically rich in other micronutrients such as vitamins, hence one cannot be sure which specific components of the foods may be involved in cancer prevention. In addition, high fibre diets are typically low in calories and fat, two dietary constituents believed to play a causative role in cancer. The evidence regarding fibre intake and colon cancer however is compelling enough to warrant the recommendation of a diet high in fibre, which is undoubtedly also beneficial in promoting a general state of good health. Food restriction. A decreased incidence of cancer has been demonstrated not only by the administration of specific anti-mutagens and anti-carcinogens, but also by the restriction of food, which has also been illustrated to elongate the lifespan of experimental animals. Although the potential anti-carcinogenic effects of calorific restriction have not been demonstrated directly in humans, there is compelling evidence that energy restriction and the resultant retarded growth rates give rise to a reduced incidence of breast cancer [2]. This evidence is supported by the use of height as an indicator of energy intake during the development of migrants switching from low to high calorie intake. How does food restriction give rise to a lower incidence of tumours? The exact mechanism is not known although it is possibly via an inhibition of the generation of reactive oxygen species or due to a decrease in the rate of cell turnover. It is extremely difficult to assess the relevance of this phenomenon to humans. The effects of calorific restriction would be extremely difficult to measure, particularly as low calorie diets are generally high in fruits, vegetables and fibre which are associated with a decreased incidence of neoplasms anyway. Maintaining weight within a desirable range and participating in a moderate level of exercise are current recommendations for a generally healthier lifestyle and may be beneficial in minimising the risk of cancer. ...read more.

Epidemiological studies are not without their faults and it is difficult to assess the animal experiments in relation to human exposure scenarios therefore further studies in this area are required. Conclusion. In conclusion the human diet consists of a complex array of substances many of which are potentially carcinogenic. It is hence extremely difficult to assign a preventative or causative role to any one dietary constituent. It is extremely difficult also to distinguish causal relationships from indirect associations and there is the added complication of possible synergistic relationships between dietary components. Both epidemiological and experimental studies have their drawbacks. Human epidemiological studies are notoriously difficult to plan and interpret and laboratory studies on animals often involve the induction of tumours by various carcinogens, also the anti-carcinogen in question is administered in high doses therefore the relevance to human exposure scenarios is questionable. Nevertheless this is one area where extensive research has been conducted and this research can be used in the proposal of various dietary intervention strategies as part of a set of general lifestyle recommendations for healthy living including. -An increase in fruit and vegetable consumption to 5 or more portions a day. -An increase in cereal bran fibre intake. -An adjustment of total fat intake to around 20% of total calories. -An avoidance of salted and pickled foods. -The consumption of alcoholic beverages in moderation. -A moderation in the consumption of well cooked red meat. Future research Animal experiments and human epidemiological studies have provided numerous and consistent pieces of evidence implementing dietary factors in the occurrence of carcinogenesis, however the potential effects are diverse and hence are very difficult to quantify. It is for this reason that further research is required and such research may include: -Assays of the mutagenic and carcinogenic potentials of specific dietary constituents, for example via the Ames test. -Assays of DNA and protein adducts in humans. -The sequence analysis of mutations within oncogenes and tumour suppresser genes in tumours. -Investigations into the occurrence of mutations in xenobiotic metabolising enzymes and their potential contributions to diet-induced cancer. -Further investigations into the mechanisms of mutagenesis and carcinogenesis. ...read more.