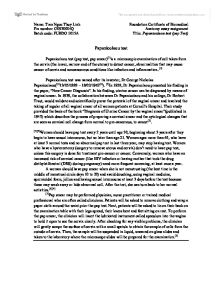 Papanicolaou test (pap test, pap smear)[1]is a microscopic examination of cell taken from the cervix (the lower, narrow end of the uterus) to detect cancer, abnormalities that may cause cancer of cervix and noncancerous conditions like infection and inflammation..[1]

Papanicolaou test was named after its inventor, Dr George Nicholas Papanicolaou([2]13/05/1883 – 18/02/1962[2]). [3]In 1928, Dr Papanicolaou presented his finding in the paper, “New Cancer Diagnosis”. In his finding, uterine cancer can be diagnosed by means of vaginal smear. In 1939, the collaboration between Dr Papanicolaou and his college, Dr Herbert Traut, would validate and scientifically prove the potential of the vaginal smear and involved the taking of regular of all vaginal smear of all women patients at Cornell’s Hospital. Their study provided the basis of the book “Diagnosis of Uterine Cancer by the vaginal smear”(published in 1943) which describes the process of preparing a cervical smear and the cytological changes that are seen as cervical cell change from normal to pre-cancerous, to cancer[3].

[1][4]Women should have pap test every 2 years until age 30, beginning about 3 years after they begin to have sexual intercourse, but no later than age 21. Women ages more than 65, who have at least 3 normal tests and no abnormal pap test in last three year, may stop having test. Women who have a hysterectomy (surgery to remove uterus and cervix) don’t need to have pap test, unless this surgery is done for treatment pre-cancer or cancer. Conversely, women who have an increased risk of cervical cancer (like HIV infection or having mother that took the drug diethylstilbestrol (DES) during pregnancy) need more frequent screening, at least once a year.

A woman should have pap smear when she is not menstruating (the best time is the middle of menstrual circle days 10 to 20) and avoid douching, using vaginal medicine, spermicidal foam, jellies and having sexual intercourse at least 3 days before the test because these may wash away or hide abnormal cell. After the test, she can turn back to her normal activities.[1][4]

[5]Pap smear may be performed physician, nurse practitioner or trained medical professional who are often called clinicians. Patients will be asked to remove clothing and wrap a paper cloth around the waist prior the pap test. Next, patients will be asked to lie on their back on the examination table with their legs spread, their knees bent and feet sitting on rest. To perform the pap smear, the clinician will insert the lubricated instrument called speculum into the vagina to hold it open to see the cervix clearly. After checking for any visible problems, the clinician will gently scrape the surface of cervix with a small spatula to obtain the sample of cells from the outside of cervix. Then, the sample will be suspended in liquid, smeared on glass slides and taken to the laboratory where the microscope slides will be prepared for the examination.[5]

[1][5]Pap smear results are usually available within two weeks. Most laboratories in USA use a standard set of terms called the Bethesda System(TBS) to report the results while some laboratory use older system like the cervical intraepithelial neoplasia(CIN) system or the Class system. If no abnormal is found, the result will be called “negative intraepithelial lesion or malignancy”. Conversely, the result will be “positive” or “abnormal”. Under TBS, samples with cells abnormalities are divided into following categories:  ASC, AGC, AIS, LSIL, and HSIL. Firstly is ASC (atypical squamous cells, squamous cells is thin flat cell that form a surface of cervix) which is TBS divided into two groups: ASC-US and ASC-H. ASC-US is atypical squamous cells of undetermined significant while ASC-H is atypical squamous cells cannot exclude high-grade squamous intraepithelial lesion. They do not appear completely normal and doctor are not certain about what cell changes. ASC-US considered mild abnormalities while ASC-H may be a high risk of preccancer. Some ASC-US change may relate to human papillomavirus(HPV) infection. Secondly is AGC (atypical glandular cells, glandular cell are mucous- producing cell found in the endocervical canal or in the lining of uterus). Like ASC, AGC do not appear normal and doctors are still uncertain about which changes of cells. Next is AIS which is endocervical adenocarcinoma in situ. Precancerous cells can be found in glandular tissue. LSIL is low-grade squamous intraepithelial lesion (means early changes in size and shape of cells) which is caused by HPV infection. Though HSIL(which have higher risk of invasion cancer) are still squamous intraepithelial lesion, it is high-grade (more marked changes of size and shape of precancerous cell).That means abnormalities look very different from other cells, unlike LSIL.

If the result is abnormal, the physicians may repeat the test. This make cells change in the cervix will go away without treatment. If women have ASC-US, estrogen scream will be applied to the cervix for few weeks because the cells change are caused by low hormones. Otherwise, if the results show ASC-H, LSIL or HSIL, the physician will use an instrument like a microscope called colposcope to finds abnormalities, then the physicians may perform endocervical curettage (involves scraping cells from inside endocervical canal with a curette) or biopsy (the removed of cells or tissues form abnormal area). However, if results show the high risk of cancer, the further treatment will be needed like LEEP (loop electrosurgical excision procedure - use an electrical current as a knife which is passed through a thin wire loop), cryotherapy (freezing the abnormalities) and laser therapy (use narrow beam of intense light to destroy or remove abnormal cells).[1][5]

Although new techniques are developed recently for sample collecting as well as machines for examination, any mistakes can happen during the test like missing abnormalities. However, regular test will reduce the ratio of false results because missing abnormalities can be found next time and treated before the cancer developed. That’s why pap test is very important of women health’s care and they should talk to the doctor when and how often they should have test to protect themselves.

[2]…[2]: George Papanicolaou: Inventor of the pap smear. Available from: