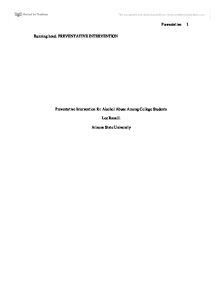 Running head: PREVENTATIVE INTERVENTION Preventative Intervention for Alcohol Abuse Among College Students Lee Ranalli Arizona State University Prevention Intervention for Alcohol Abuse Among College Students Introduction The two articles reviewed both focused on preventative programs for alcohol abuse aimed at college students. The first article (Study A), is titled Prevention of Heavy Drinking and Associated Negative Consequences Among Mandated and Voluntary College Students and was written by Kim Fromme and William Corbin (2004) from the University of Texas. The intervention that was evaluated in this study was a Lifestyle Management Class which was run by either peers or professionals. Both the peers and the professionals all had to go through a minimum of 16 hours of training targeting "group process skills, counseling techniques, lifestyle and stress management skills, information about college drinking and drug use, and the philosophy of balance and moderation" (Fromme & Corbin, 2004). Other essential elements of the Lifestyle Management Class were the approaches of using a nonjudgmental and empathetic attitude along with usage of motivational interviewing (Fromme & Corbin). The second article (Study B), is titled Brief Intervention for Heavy-Drinking College Students: 4-Year Follow-Up and Natural History and was written by J. S. Baer, D. R. Kivlahan, A. W. Blume, P. McKnight and lastly G. A. Marlatt (2001). The intervention used in this study was an individually tailored alcohol prevention program for college freshmen who reported drinking in heavy amounts in high school. Similarly to study A, motivational interviewing was a major part in personalizing the intervention for the college students and having an impact in the results. ...read more.

Assignment to the study included a mass mailing of a questionnaire to 4000 incoming freshman regarding alcohol consumption. Out of 2041 students who completed the questionnaire, 508 were considered being high risk. Of the identified high risk, 348 were randomized into either an intervention group or nonintervention group. For the normal student comparison, 113 randomly selected responders (including 28 high risk) were used to track the natural changes of drinking behavior that occurs over time (Baer et al., 2001). Unlike study A, study B did not have clear kept data on the rate of adherence throughout the assessments but it does state that "80% provided data at 4 of 5 time points, including 4 year. Consistent with university norms, 53% of the sample reported having graduated at the 4-year follow-up" (Baer et al.). Excluding an initial six month follow-up, "follow-up assessments, which repeated the questionnaire measures included at baseline, were completed by mail annually" (Baer et al., 2004). Also, at the end of the first assessment roughly 50% of participants completed the phone interview in addition to completing the questionnaire. The phone interview is the time when the trained professionals would collect data and use motivational interviewing in creating change. Interestingly enough, this study was actually referenced in study A as the longest range of time for follow-up assessments. Also, although much more difficult to complete, long-term results in the end did show effectiveness in measuring the intervention that were instilled in their participants their freshman year (Baer et al.). For this particular study, the "how and who" parts of the instrument section was not defined in many aspects especially in regarding the distribution of the questionnaires. ...read more.

However, the four-year follow-up of study B, can have the benefit of showing a more fixed change in how the intervention really worked. Another major effective tool that both studies had in common was the application of motivational interviewing and the ability to create discrepancies in the students' goals versus their drinking habits which helped create the environment for change. In addition, the biggest benefits of both the studies includes that both of them showed evidence of how a preventive intervention in college students can have a positive effect in decreasing overall alcohol abuse in the participants. This can be used as a major finding and gives not only evidence but also hope for universities to possibly take part of reaching out to their student body for this common high-risk behavior. I believe that overall, study A is most feasible study for the clinical setting. The interacting that takes place in study A reminds me very much of the process and theory behind many individual and group therapies that I have seen in clinical settings and with the professional or peer-led groups it can be very effective. Realistically, I believe study B is not very feasible in the clinical setting because of the lack of human connection in just being mailed questionnaires along with the an occasional phone call for support. Hypothetically, a possible mix between the strengths of both these studies to help minimize their weaknesses and could create an environment for a very effective alcohol prevention program. In conclusion, I believe that study A over study B outlined their overall process and data collection in a more realistic and well-defined manner in possibly being able to apply it to other campuses or even clinical settings. ...read more.