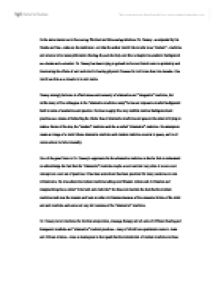 Recovering The Soul and Reinventing Medicine and Healing beyond the Body - Dr. Dossey.

In the same manner as in Recovering The Soul and Reinventing Medicine Dr. Dossey - as expected by his friends and foes - takes on the traditional - or what the author would like to refer to as "modern" - medicine and science in his latest publication Healing Beyond the Body and this is despite his academic background as a doctor and a scientist. Dr. Dossey has been trying to go back to his new found roots in spirituality and discovering the effects of soul and mind in healing physical illnesses for well more than two decades. One would see this as a crusade in its own terms. Dossey strongly believes in effectiveness and necessity of alternative and "integrative" medicine, but unlike many of his colleagues in the "alternative medicine camp" he has an impressive medial background both in terms of academics and practice. He tries to apply this very credible medical background and practices as a means of defending the whole idea of alternative medicine and goes to the extent of trying to make a fusion of the two, the "modern" medicine and the so called "alternative" medicine. He attempts to create an image of a world where alternative medicine and modern medicine co-exist in peace, and in all counts above he fails miserably. ...read more.

It seems to the author that Dr. Dossey is just trying to grab hold of anything that can help him put together a theory that not even he can really define or explain. To the author's amazement, Dr. Dossey with all the years of scientific background fails to realize that he cannot label any vague idea that pops in his head as a scientific theory. The author strongly believes that Dr. Dossey has now two feasible options, he can either set aside this - intentional or unintentional - ambiguity in his definition of his model and truly define the model of non-local mind or he can simply quit the struggle of giving his beliefs and theories a scientific exterior. The other important point that catches the eye about Dr. Dossey's arguments is his somewhat fanatic respect for data. This is despite the fact that alternative medicine in general - unlike the modern medicine - lacks any credibility in terms of scientific data and patterns in data. Even when there is an attempt to present the medical community and the society in general with statistics and patterns on effectiveness of alternative medicine, one notices that very often the collected data has not been collected under legitimate scientific conditions and using well-known methods of harvesting data. ...read more.

He ignores the fact that science has never claimed the ability to solve all of man's problems and that science has a very well defined set of boundaries. Dr. Dossey, though a respected physician and scientist, has crossed the line of reason and logic in expressing his views on modern and alternative medicine. He has proposed scientifically inconsistent models for functionality of human mind and has unsuccessfully searched for new ways of legitimizing his theories. He continues his efforts to establish a scientific explanation for the effects of prayer and all sorts of spiritual matters that - successfully or not - play a role in the process of healing. He tries to present the alternative medicine as the savior of mankind in the face of problems that yet have not been solved by modern medicine. This goes on without hinting to the not very impressive history of alternative medicine. As a doctor who has sworn the Hippocratic oath, Dr. Dossey very often fails or refuses to distinguish between elements that make patients temporarily feel good and elements that will keep them alive. This in the eyes of the author is the biggest responsibility that he has to bear and for that matter he has to be prepared to deal with his consciousness. ...read more.