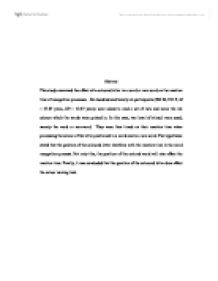 the effect of a coloured letter in a word or non word on the reaction time of recognition processes.

Abstract This study examined the effect of a coloured letter in a word or non word on the reaction time of recognition processes. . Six hundred and twenty six participants (292 M, 334 F, M = 27.97 years, SD = 12.07 years) were asked to read a set of lists and name the ink colours which the words were printed in. In this case, two level of stimuli were used; namely the word or non-word. They were then timed on their reaction time when processing the colour of the letter positioned in a word and in a non word. The hypothesis stated that the position of the coloured letter interferes with the reaction time in the word recognition process. Not only this, the position of the colored word will also affect the reaction time. Finally, it was concluded that the position of the coloured letter does affect the colour naming task. Introduction Humans have many behaviours that are automatic like sensory reactions. Learned behaviours like reading are also said to be automatic where a stimuli elicits the behaviour in the absence of intention. The analyses of single words of semantic and lexical are uncontrollable. ...read more.

Raz, Kirsch, Pollard and Nitkin-Kaner (2006) had noticed that Stroop effect could be reduced or even eliminated by hypnotizing participants and telling them that the words were in a foreign language so they could focus fully just on colour alone. With this, they did a research and it shown that hypnosis is only effective when the person being hypnotized is already susceptible to hypnosis. Therefore in order for hypnosis to work, the person being hypnotized must be highly suggestible. With this, an experiment was done on 25 highly suggestible individuals who were divided into two groups. Each group practiced the Stroop task for a few minutes: a word was flashed on the screen, and participants had to press a key on the computer that corresponds to the color that was displayed in. One group was being hypnotized, but the other was not. Whether or not the participants were hypnotized, all showed a diminished Stroop Effect the words were suggested to be gibberish. There was no significant difference in the results between hypnotized and non-hypnotized participants. As the Stroop effect was not completely eliminated in this task, Raz argues on the basis that this experiment demonstrates that reading is not entirely involuntary. ...read more.