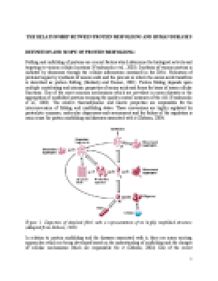 The Relationship Between Protein Misfolding and Human Diseases

﻿THE RELATIONSHIP BETWEEN PROTEIN MISFOLDING AND HUMAN DISEASES DEFINITION AND SCOPE OF PROTEIN MISFOLDING: Folding and unfolding of proteins are crucial factors which determine the biological activity and targeting to various cellular locations (Vendruscolo et al., 2003). Synthesis of various proteins is initiated by ribosomes through the cellular information contained in the DNA. Formation of proteins begins by synthesis of amino acids and the process in which the amino acids transform is described as protein folding (Hardesty and Kramer, 2001). Protein folding depends upon multiple contributing and intrinsic properties of amino acids and forms the basis of many cellular functions. One of the most common mechanisms which are prevalent in many diseases is the aggregation of misfolded proteins escaping the quality control measures of the cell (Vendruscolo et al., 2003). The relative thermodynamic and kinetic properties are responsible for the interconversion of folding and misfolding states. These conversions are highly regulated by proteolytic enzymes, molecular chaperones and environment and the failure of the regulation is main cause for protein misfolding and diseases associated with it (Dobson, 2004). Figure 1: Depiction of Amyloid fibril with a representation of its highly misfolded structure (Adapted from Dobson, 2004) In relation to protein misfolding and the diseases associated with it, there are many exciting approaches which are being developed based on the understanding of misfolding and the changes of cellular mechanisms which are responsible for it (Dobson, 2004). One of the recent developments regarding the scope of protein misfolding in diseases is the proposal by National Institute on aging (NIA) whose main responsibility is to support research on the effect of aging on cardiovascular, musculoskeletal, immune, nervous and sleep syndromes. NIA supports the development of assays to screen molecules for determining efficacy in these diseases due to protein mis-processing, mis-targeting and misfolding (National Institute on Aging, 2010). INTRODUCTION: Research done on diseases caused by protein misfolding: There is little knowledge on the pathological behaviour of diseases in relation to protein misfolding however many recent studies have shown the influence and relation of protein misfolding in diseases. ...read more.

The research data reveals that PAO, pre Amyloid oligomers which is pre soluble is the major toxic entity responsible for pathology in Amyloid plagues and cardiac disorders. Many of the studies indicated the presence of PAO in many cardiomyocytes of samples in heart failure (Scott and Robbins, 2008). Experiments were conducted in transgenic mice to study the hypothesis of involvement of cardiomyocytes restriction enzyme in heart failure. The results of these experiments showed that polyglutamine residues of 83 (PQ83) or 19 (PQ19) were expressed by the mice confirming the accumulation of PAO in heart failure (Scott and Robbins, 2008). Further investigation suggests that long PQ lesser than 50 results in toxicity of neurological syndromes and shorter repeats of PQ tend to be benign. The expression of PQ83 results in accumulation of intracellular PAO which results in formation of aggregates and misfolded proteins causing death of cardiomyocytes leading to heart failure. Additional research proves that there is a presence of increased autophagy and necrosis associated with pathology of PQ83 cardiomyocytes. These investigations reveal the relationship between protein misfolding and cardiomyocytes death due to increase in intracellular concentration of PAO leading to heart failure (Scott and Robbins, 2008). Many investigations in similar research lines suggest that autophagy as a critical pathway responsible for the deletion of aggregated and misfolded proteins and acts as a critical form for regulation of cell clearance. The deregulation and malfunctioning of autophagy is revealed as a most important contributing factor for pathogenesis of many cardiac and neurological disorders (Zhu et al., 2007). Autophagy is revealed as the most essential function in lysosomes and basal cardiomyocytes and up regulation and down regulation could lead to detrimental effects on heart (Zhu et al., 2007). Therefore all these studies reveal that there is a close relationship between homeostasis of heart and autophagy, misfolding of cardiomyocytes. 3. Protein misfolding in autoimmune disorders: Role of HLA-B27 in spondyloarthropathies The investigation of misfolding caused in the antigen HLA-B27 in relation to spondyloarthropathies is yet to be published. ...read more.

Additional research is being undertaken of study the effect of glycation on diabetes and various other pathological progressions. CONCLUSION: Various investigations revealed that protein misfolding causes many diseases which are about 30 in number termed together as conformational diseases or misfolding diseases. The majority of conformational disorders are identified as a reason of ageing causing abnormal conditions of protein assembly and aggregation. Some of the various conformational disorders are caused due to deposition of various polypeptides like ? synuclein, Amyloid ?, tau and huntingten which leads to various neurodegenerative disorders of brain which are Parkinson?s disease and Alzheimer?s disorder. Gain of toxic function is another major disorder caused by protein deposits leading to diabetes type 2 through amylin and amyloidosis related to haemodialysis through ?2 micro globulin. The research activities explain that the transmission of diseases is caused majorly due to the aggregation of proteins as in case of Creutzfeldt-Jacob disease (CJD), Bovine spongiform encephalopathy (BSE). There is also evidence that aggregates of Amyloid ?, tau and Huntingten possess infectious properties. The review highlights various reasons for protein misfolding and the process of misfolding from normal protein folding mechanisms which is responsible for many of diseases affecting the human system like cardiac, pulmonary, neurodegenerative and systemic deficiencies. Many of the mechanisms of protein misfolding are under research on the basis of which therapeutic interventions could be framed to improve the health state of human beings. Recent evidences also show that the environmental and lifestyle modifications as a major cause of protein misfolding. These environmental factors could be controlled by planning appropriate lifestyle to reduce the deleterious effects of damage on protein functioning. Various ages related protein misfolding could be highly regulated by many preventive measures to improve protective mechanisms in the cellular metabolism (Markus et al., 2006). The review emphasises the need of investigation in the reason for infection of the aggregated proteins and role of cellular factors like chaperone interactions in protein aggregation and clearance of aggregated proteins. There is a need of holistic approach in protein folding in order to understand the biophysical, biological and physiological mechanisms (Markus et al., 2006). ...read more.