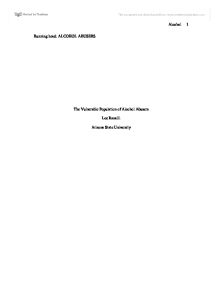 The Vulnerable Population of Alcoholics

Running head: ALCOHOL ABUSERS The Vulnerable Population of Alcohol Abusers Lee Ranalli Arizona State University The Vulnerable Population of Alcohol Abusers Introduction I chose the vulnerable population of people who abuse alcohol because of the history of this type of abuse in my family and my own personal drive of wanting to learn more about it. The main subject I was looking forward to learn more about was comparing the findings on researched family dynamics to my own childhood family dynamics involved with alcoholism. I have learned time and time again about all the genetic factors and the specific science of alcoholism but I thought it might be nice change of pace to research the bigger picture of the effects of this disease and not so much the disease itself. In this paper, alcohol abuse and alcoholism are similar terms but with different definitions. Alcohol abuse will be defined as "pattern of drinking that results in harm to one's health, interpersonal relationships or ability to work" ("What is the Difference", 2006). This includes involving oneself in risky behavior such as drinking and driving, being irresponsible such as missing school and work, and has the potential to eventually lead to alcoholism ("What is the Difference", 2006). Alcoholism will be defined as a disease that can be diagnosed by looking at a variety of components including "a strong ...read more.

The only time they get rewarded or recognized is when they excel at their specialty. The scapegoat is usually an unlucky child that is delegated the reason for all that goes wrong with the family. The mascot/cheerleader is usually the comedian of his/her family and their classmates and is usually popular among both. Occasionally, they do not use the best timing or circumstances for their comedy resulting in adverse reactions from the person or persons it was directed towards. Finally, the lost child is the member of the family who is not normally visible and spends most of their time participating in non-active roles like playing Nintendo, watching television or spending the time in their room away from the family. This child often knows much more than given credit for about the family status and often can have weight problems for their inactive lifestyle. The article continues to express how members of healthy and functional families do not bunch into these particular roles (Walker, 2002). According to "Group Meetings" (2006) many alcoholics spend "aimless hours" of their time in the bar settings. A bar is a place to socialize and be with other people who share the same interests and lifestyle. Although, once an alcoholic decides that they feel it is time to give up alcohol and actively seek change there is plenty of support around the nation to find help and surround themselves in new social settings. ...read more.

In summary, this objective has the goal to raise the smoking cessation attempts for active smokers of adults over the age of 18 from 41% to 75% by 2010 ("Increased Smoking Cessation", 2000). Prevention of Environmental Health Threat The United States workforce started to take a stance on public smoking in 1999 and never looked back. Ever since 1999, roughly 70% of the jobs in the United States have been under some type of smoke-free environment. As recent as 2005, there have been nine states to ban smoking in almost all public work places including areas such as bars, restaurants and nightclubs ("Secondhand Smoke Fact Sheet", 2006). In 2006, Arizona will try to join that list of the nine other states with proposition 201 up for vote. Proposition 201 is known as the "Smoke-Free Arizona Act" which entails that the people of Arizona have "the right to breathe clean indoor air in public places and at work, and that the health of Arizonans will be improved by prohibiting smoking in all enclose public places and places of employment" ("Ballot Propositions", 2006). There are a few cities and towns of Arizona that have already taken their own steps to restricting smoking in their personal public places but this would be a major stepping stone if it is able to be accepted to the state level ("Ballot Propositions", 2006). ...read more.