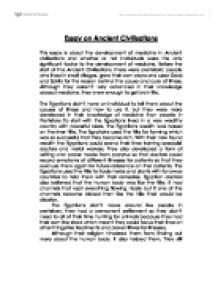 This essay is about the development of medicine in Ancient civilisations

Essay on Ancient Civilisations This essay is about the development of medicine in Ancient civilisations and whether or not individuals were the only significant factor to the development of medicine. Before the start of the Ancient Civilisations, there were prehistoric people who lived in small villages, grew their own crops and used Gods and Spirits for the reason behind the cause and cure of illness. Although they weren't very advanced in their knowledge aboout medicine, they knew enough to get by in life. The Egyptians didn't have an individual to tell them about the causes of illness and how to ure it, but they were more developed in their knowledge of medicine than people in Prehistory. To start with the Egyptians lived in a very wealthy country with powerful rulers. The Egyptians wealth was based on the river Nile. The Egyptains used the Nile for farming which was so successful that they became rich. With their new found wealth the Egyptians could spend their time training specialist doctors and metal workers. ...read more.

and the body was preserved with salts and spices to dry it out before it was wrapped in bandages, because the Egyptians believed that people would need their bodies in the afterife so dissection of the other parts of the body were not allowed. The Greeks were slightly more developd than the Egyptians. The Greeks did have an individual to help with the progression of medicine called Hippocrates who introduced the theory of the four humours, he believed that the four natural elements were linked to the four seasons and how a person became ill. Hippocrates also believed that the for humours needed to remain balanced in order for someone to stay healthy. Hippocrates was important tt o the development of medicine in Greece; he had his own collection of books that were still being used for hundreds of years after his death, he developed his own theories for the causes of disease, he encouraged doctors to use natural treatments for illness instead of going to see Gods, he had an oath that is still being used today and he demonstarted how useful it was to observe and reord patients symptoms and treatments. ...read more.

The Romans came up with their own public health system that provided the towns in Rome with water for fountains, public baths and latrines, and had a sewer system to take away any waste products to a sewer away from the towns. They came up with this idea of the public health system without an individual but they did have one. The individual that the Romans had was from Greece and was called Galen. Galen followed the ideas of Hippocrates and took them one step further he believed in using a theory of the opposites to balance the four humours he also tried to prove his ideas to other doctors but dissection wasn't allowed in Rome so Galen had to try and show off his ideas using animals. In conclusion I think that although individuals like Hippocrates and Galen did help quite a lot with the development of medicine there were other factors that each ancient civilisation had that also contributed to the progression in medicine like religion. Religion played a big part in each ancient civilisation but I think that individuals and other factors contributed equally together side by side in the progression of medicine. ...read more.