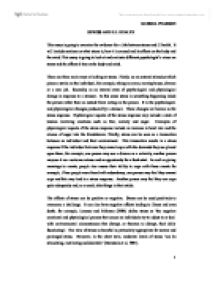 This essay is going to examine the evidence for a link between stress and ill health. It will include sections on what stress is, how it is caused and its effects on the body and the mind. This essay is going to look at and evaluate different psychologist's views on stress and the effects it has on the body and mind. There are three main ways at looking at stress. Firstly, as an external stimulus which places a strain on the individual, for example, taking an exam, moving house, divorce or a new job. Secondly, as an internal state of psychological and physiological change in response to a stressor. In this sense stress is something happening inside the person rather than an outside force acting on the person. It is the psychological and physiological changes produced by a stressor. These changes are known as the stress response. Psychological aspects of the stress response may include a state of tension involving emotions such as fear, anxiety and anger. Examples of physiological aspects of the stress response include an increase in heart rate and the release of sugar into the bloodstream. Thirdly, stress can be seen as a transaction between an individual and their environment. This transaction results in a stress response if the individual believes they cannot cope with the demands they see placed upon them, for example, one person may see a divorce as a calamity, another person may see it as a welcome release and an opportunity for a fresh start. ...read more.

Seyle identified three main stages in the stress response. The first stage, the alarm reaction, mobilises the body for swift action such as Cannon's fight or flight response. It occurs over seconds or minutes in the face of a sudden stressor. Various reactions happen within the body to enable the body to either stay and fight or run away from the stressor. The second stage, the resistance stage occurs when a stressor is resistant. The resistance stage can harm health, for example, it can reduce the effectiveness of the immune system so lowering the body's resistance to disease. The last stage, the exhaustion stage, is reacted when a stressor persists still longer, and the body's defences can no longer cope. Illness is the cost of an unsuccessful defence against long term stress. In extreme cases it can result in death. The General Adaptation Syndrome has been extremely influential. In particular, it has identified a link between psychological factors and physical illness. Many common stressors such as unemployment, marital conflict, preparing for an examination and the death of a close relative are associated with the stress responses outlined in the GAS. These stressors are often accompanied by the physiological changes described by Seyle and sometimes result in the psychosomatic illnesses he identified. It has been criticised that people do not always respond in the same way to stressors and the experience of stress. ...read more.

Asking people to recall events may produce invalid data. They may simply forget. Major life events do not happen every day by daily hassles do. Daily hassles are the 'irritating, frustrating, distressing demands that to some degree characterise everyday transactions with the environment'. (Kanner et al, 1981). A number of researchers argue that daily hassles lead to more stress and have a greater impact on physical and mental health than life events. In one study using a hassles scale of 117 items, 100 middle aged adults completed the scale each month, for 9 months. They also completed the SRRS life events scale. Hassles scores were a better predictor of psychological problems, such as, depression and anxiety, than life events scores (Kanner et al, 1981). The daily hassles scale has some of the same problems as the SRRS. The link between hassles and psychological and physical disorders is correlational. It is therefore difficult to separate cause from effect. There are many ways of coping with stress a few of these are antianxiety drugs and antidepressant drugs, which can reduce the effects of stress. Biofeedback is a method used to help people control their stress by making them aware of the bodily processes and how to measure them. People can attend stress management programmes to help reduce stress and improve coping skills. ...read more.