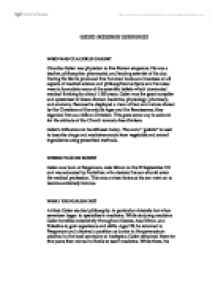 Who was Cladius Galen?

GALEN CHANGES MEDICINE WHO WAS CLAUDIUS GALEN? Claudius Galen was physician to five Roman emperors. He was a teacher, philosopher, pharmacist, and leading scientist of his day. During his life he produced five hundred books and treatises on all aspects of medical science and philosophical subjects and his ideas were to formulate many of the scientific beliefs which dominated medical thinking for about 1 500 years. Galen was the great compiler and systemiser of Greco-Roman medicine, physiology, pharmacy, and anatomy. Because he displayed a view of God and nature shared by the Christians of the middle Ages and the Renaissance, they regarded him as a fellow-Christian. ...read more.

This was a wise choice as his son went on to become extremely famous. WHAT DID GALEN DO? At first, Galen studied philosophy, in particular Aristotle but when seventeen began to specialise in medicine. While studying medicine Galen travelled extensively throughout Greece, Asia Minor, and Palestine to gain experience and skills. Aged 28, he returned to Pergamum and obtained a position as doctor to the gymnasium attached to the local sanctuary at Asclepius. Galen remained there for five years then moved to Rome to teach medicine. While there, his fame spread rapidly and brought him the post of physician to Marcellus Aurelius and his son Commodus. ...read more.

This theory was accepted until challenged by Paracelsus who believed that illness was the result of the body being attacked by outside agents. With the use of experiment Galen showed that the arteries carried blood and not air as was commonly believed. He also understood the value of the pulse in diagnosis. However, Galen also believed (incorrectly) that blood was continuously being made and used up. As well as running a busy medical practice, he ran his own pharmacy, stocked with his own medicines made from animal and vegetables extracts, many of the plants being grown in his own garden. Galen catalogued in detail various remedies including how each was made and the correct doses to be given. Galen died in the year 201 ...read more.