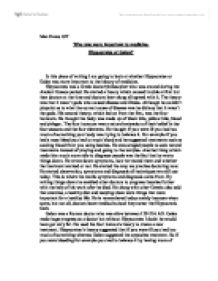 In this piece of writing I am going to look at whether Hippocrates or Galen was more important to the history of medicine.

Hippocrates was a Greek doctor/philosopher who was around during the Ancient Greece period. He started a theory which caused trouble at first but then doctors at the time and doctors later along all agreed with it. The theory was that it wasn’t gods who caused disease and illness. Although he couldn’t pinpoint as to what the correct cause of disease was he did say that it wasn’t the gods. His second theory, which led on from the first, was the four humours. He thought the body was made up of black bile, yellow bile, blood and phlegm. The four humours was a natural extension of their belief in the four seasons and the four elements. He thought if you were ill you had too much of something your body was trying to balance it. For example if you had a nose bleed you had to much blood and he suggested treatments such as sucking blood from you using leeches. He encouraged people to seek natural treatments instead of praying and going to the temples. Another thing which made him much more able to diagnose people was the fact that he wrote things down. He wrote down symptoms, how he treated them and whether the treatment worked or not. He started the way we practise doctoring now. He started observation, symptoms and diagnosis all techniques we still use today. This is where the words symptoms and diagnosis came from. By writing things down he enabled other doctors to progress theories further with the help of his work after he died. He along with other Greeks also said that exercise, a healthy diet and keeping clean were things that were important for a healthy life. He is remembered today mainly because when some, but not all, doctors leave medical school they swear the Hippocratic Oath.

Galen was a Roman doctor who was alive between 129-216 AD. Galen made huge progress as a doctor but without Hippocrates I doubt he would have got very far. He used the four humours theory to create a new treatment. Hippocrates’s theory suggested that if you were ill you had too much of something whereas Galen suggested the opposites treatment. So if you were bleeding for example you had to balance it by having more of something else. The next theory he made though was entirely correct. People back then thought the heart controlled everything but Galen proved otherwise. He cut open a live pig and by cutting a certain nerve going to the brain he made it stop squealing and die.  Therefore proving that the brain controlled everything. His third idea was that every organ in the body had a role. He made quite accurate predictions as to what did what and where things were inside the human body because he cut up animals, often monkeys, to look inside them. But they were only quite accurate as he was held back by religion which thought cutting up dead bodies showed a lack of respect. Therefore some of his detail was incorrect. For example, he said that the left kidney was higher than the right. This, of course, was correct for a monkey but not for a human.

It is very hard to define who was more important to medicine as there are so many ways of deciding that. But in many ways I think Galen was more important because he made the most progress. Although he would not have achieved much unless Hippocrates had written down his work, Galen did spend less time thinking and more time investigating and proving. His work, theories and beliefs were used for 1500 years which proves how accurate and how knowledgeable he was. He still believed in the four humours theory but created a new treatment. But for me the biggest breakthrough made by either of the two doctors was the proof that it was the brain that controlled everything and it was Galen who proved this. By discovering that, he showed everyone how they worked and why they did certain things. This was an important change in medical thinking. To add to this he knew basically where everything in the body was which helped him to make more accurate diagnosis. With only limited capabilities, (he couldn’t cut up humans) he did well to make such accurate theories for how the body works. It is so hard to judge but from my perspective I think Galen was more important to medicine.