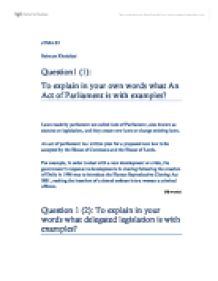 eTMA 02 Behnam Kholafaei Question1 (1): To explain in your own words what An Act of Parliament is with examples? Laws made by parliament are called Acts of Parliament, also known as statutes or legislation, and they create new laws or change existing laws. An act of parliament is a written plan for a proposed new law to be accepted by the House of Commons and the House of Lords. For example, in order to deal with a new development or crisis, the government's response to developments in cloning following the creation of Dolly in 1996 was to introduce the Human Reproductive Cloning Act 2001, making the insertion of a cloned embryo into a woman a criminal offence. (98 words) Question 1 (2): To explain in your words what delegated legislation is with examples? The parliament can give power to create law to other authorities through 'enabling acts', so delegated legislation is law created by other bodies to which the power has been given by the Parliament. There are five type of delegated legislation: statutory instruments, byelaws, Orders in Council, Court Rule committees and professional regulations. An example of a byelaw made by a local authority is the Trafalgar Square and Parliament Square Garden Byelaws 2002 (Greater ...read more.

This uncertainty is increased by the ability of the judiciary to select which authority to follow through use of distinguishing cases on their facts. It also creates fixity, as it is possible that the law in relation to any particular area may become rigid on the basis of an unjust precedent with the consequence that previous injustices are perpetuated. Judicial precedent also causes unconstitutionality. This fundamental question refers to the fact that the judiciary are overstepping their role by making law rather than restricting themselves to the role of simply applying it, and if this happens then it's against the declaratory theory of law claiming that judges do not make law, but they simply interpret what the law is. Lastly, the law depends on citizens reporting cases to the courts after some accident they had, so this does not ensure consistency or certainty. On the other hand, certainty itself can slow down the development of the law by not allowing it to be more flexible and creative. In addition, another crucial role the judiciary plays has to do with statutory interpretation. It is a frequent occurrence that the meaning of different words or phrases in statutes is not clear cut, but perhaps too broad, vague, ambiguous or inadequate. ...read more.

In turn, the pressure groups involvement in the political arena actually helps that society to progress as a whole and not remain idle or inactive. There are also some disadvantages to pressure groups, as they may not always represent or put forward their members views, wishes or interests because they do not have elected leaders or always consult their members. It is only a minority of those groups that have a system for seeking advice from their affiliates. As a consequence, the group's associates cannot contribute to all the prospective possibilities articulated by the group's administrator. Another disadvantage has to do with pressure groups deciding to become quite forceful through participating in demonstrations, often of a large scale, which could result in major conflicts and clashes with the police. In cases where such threatening strategies are used by pressure groups, democracy could be in jeopardy or even destabilise. In this manner, even though group competition or opposition can be otherwise healthy as it could help put forward diverse opinions in a democratic society, on the other hand it could delay or obstruct social changes that are much needed. (582 words) ...read more.