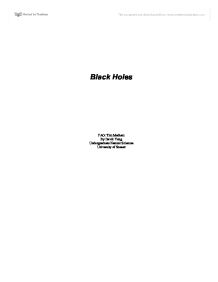 Black Holes FAO: Tim Metham By David Yong Undergraduate Natural Sciences University of Sussex Black Holes The term black holes is a recently coined term, however the existence of these occurrences has been predicted for two hundred years or so. Since the term black holes has been used, the science fiction involved with these relatively new phenomena has been fantastical. The wonder of these events, that are so powerful that they can drag light into themselves, has been the fuel for theories and research. This essay will go through the creation, the detection and the finale of black holes. How are the Created? One way that black holes are formed is from the expiration of stars. Stars which are over three solar masses are able to become black holes. During a stars life cycle there is a fine balance being upheld. The gravity trying to pull the hole structure into one central point, the same force that keeps us all on the surface of the earth, and the explosive radiation caused from the hydrogen fusion process. This balance is not only broken at the end of the stars life, but at the beginning, proven by the Cepheid variable that we can us as standard candles. However, the balance is broken once and for all, due to the fusion process grinding to a halt as the hydrogen runs out. ...read more.

can be picked up by special telescopes. Gravity lensing occurs when a black hole comes very near to the path between stars and the Earth. The light flying by the black hole is not always sucked into the hole itself but its path could be distorted. If the path of the light is focused onto Earth then the star will seem to be more luminescent while the black hole is in the correct position. The last way is more difficult to explain, because I have already stated that even light cannot escape a black hole. But black holes seem to radiate. This radiation is called Hawking Radiation (after Stephen Hawking). To understand this radiation you must understand a little about quantum physics, which states that a vacuum in space is not empty, but dynamically filled with particles and their anti-particle, for example an electron and its anti-particle the positron. This still means that the vacuum maintains is zero energy level as the life of these particles before they annihilate each other is a matter of millionths of millionths of a second. However, if the two particles come into the vacuum near enough to a black hole, then one of the pair could be sucked into the black hole. Due to the fact that the particles should annihilate each other and now cannot, one of the particles becomes a real particle rather than a virtual particle. ...read more.

Death of a black hole The death of a black hole is to do with the unsuspecting virtual particle that didn't get away from the black hole. As it and its anti-particle are supposed to annihilate each other, there is not supposed to be one of the particles left, therefore the particle swallowed by the black hole has negative energy to cancel out the energy that has been created by the escaped particle. Therefore as the black hole has swallowed negative energy it has to lose some mass, following the equation, E=mc2. This occurrence happens as often as a beam of light can cross the black hole itself. Eventually, the black hole will dissipate. At this point all of the gravity will be released and the any light caught in the horizon would be released. Therefore if you observe something falling into the black hole, this is the point in time you would see it finally enter the black hole. However, this is the exact moment that the black hole explodes and so it may be difficult to see. Using calculations involved with Hawking Radiation, a black hole with the mass of our sun would last for 2.1 x 1067. if you remember back to nearer the beginning of this essay it was stated that primordial black holes could be formed, which would be tiny. These tiny black holes, if of the right original mass could be evaporating right now in the universe around us. ...read more.