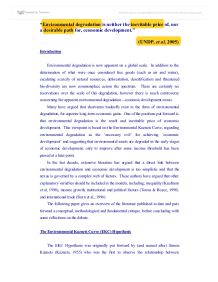 &quot;Environmental degradation is neither the inevitable price of, nor a desirable path for, economic development

Root causes of environmental degradation are both highly complex and site-specific, with the driving forces often involving adverse climatic conditions in combination with social, political, ecological and cultural factors that strain the environment beyond its ecologically sustainable limits. Population growth and scarce resources are equally as important as market mechanisms that account for the social value of the environment. Furthermore, demographic conditions such as maintained high fertility rates, as a response to lack of capital, land, insurance and credit markets further link population growth and environmental degradation, and this is most apparent in poor countries where high growth rates go hand in hand with poor production methods, in addition to increased pressure on natural resources further deteriorating the environment. Swanson (1996) explains that although population growth is clearly constraining the finite scale of the ecosystem, which sets limits to processing energy, exploiting resources and recycling wastes: 'Population size is not the only problem, as even a very rapid population growth in a low density area may prevent the onset of adjustment mechanisms necessary to adapt production and social conditions to a changed demographic situation.' (Swanson, 1996: 105) He also argues that although there are numerous avenues to resource degradation there is only one underlying source, and this is the institutional interface between human society and its environment. When this institutional structure is weak at recognizing depletion or controlling utilization of some part of the environment, Swanson argues that it is only then that there is an enhanced likelihood of degradation for the corresponding commons. 'The overarching problem that society faces is the construction of institutions capable of registering and responding to all forms of important environmental scarcities.' (Swanson, 1996: 11) Following on from this, Blaikie (1985) argues that it is important to understand the linkages between environment, economy and society as highly complex. Where very often 'development' in its crudest sense, both affects and is affected by the environmental status of a given area. ...read more.

Recent analysis shows that a fundamental critique of the EKC hypothesis is its failure to fit many forms of environmental change such as the global climate or biodiversity loss. Furthermore, the EKC is highly sensitive to policy measures which may enable the bypass of the early stages of accelerating environmental decline (Stern et al, 1996). In short, environmental degradation is neither inevitable, nor does it describe a desirable development path. So why are there so many disputes within the literature? Is the difference a disciplinary one between ecologists and geographers, or are the varied perspectives just given alternatives between environmental experts and economists? Is the disagreement methodological or essentially political? The answer to this, I believe lies in the very nature of sustainable development and poverty, both of which are inextricably linked (alongside a whole ream of further external factors) to the already complex environmental degradation - economic development debate. These competing interest groups each brings there own stance to the forefront, revealing multifaceted interrelations. To improve understanding in this field, interdisciplinary studies are essential as are the considerations for North-South power relations. This leads us to further points for reflection which include: 'Is global pollution mainly a problem of poverty or a problem of affluence?', and 'What is the balance of responsibility between North and South in global environmental degradation?' While environmental doomsday seems ever approaching here on Planet Earth, solutions to these environmental ills are controversial. Global 'environmentalism' is now deeply routed in the core of 'Western' development thought and practice; where exploitation of traditional communities in the name of environmental protection and conservation still continues despite fifty years of 'decolonization'. This dehistoricizes and marginalizes the environmental traditions of non-Western cultures, and whilst environmental degradation may not recognize national or regional boundaries, the 'global' solutions advocated by the North perpetuate the dependency relations of colonialism. Sustainable development may attempt to reconcile opposing interests between environmental degradation and economic development, however there still remains a contradiction in terms, as sustainability and economic development are based on very different and often incompatible assumptions. ...read more.

This is an excellent discussion of some key ideas related to economic development and environmental degradation. It is highly conceptual, rather than being based on case study information. There is evidence of extensive literature research, and the author shows an awareness of how these ideas relate to other key issues of global significance.