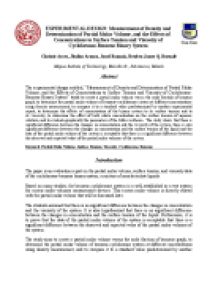 EXPERIMENTAL DESIGN: Measurement of Density and Determination of Partial Molar Volume, and the Effects of Concentrations to Surface Tension and Viscosity of Cyclohexane-Benzene Binary System

Elimination of the overflowed mixture by wiping the surface of the pycnometer was meticulously finished. The temperature of the weighed mixture was recorded. Using the same principle, the density of the mixture is the change in mass of the pycnometer after sample is contained in it per computed volume of the pycnometer. Same method is applied to all mixture. After weighing a mixture using top-loading balance, the pycnometer was cleaned by pouring out its content, washing, drying in the oven with minute amount of ethanol. The group was cautious in washing the pycnometer and kept it uncontaminated before drying since flammable compounds were used. Before the repetition of the steps, the experimenters waited until the high temperature of the pycnometer decreases to room temperature. For the partial molar volume of ethanol-water system, the values for the partial molar volume of benzene, C6H6 vs. mole fraction of cyclohexane, C6H12 was plotted. The data was expected to have a parabolic path. MS Excel was used in determining the most fixed quadratic equation on the data. Tangent lines to the curve through the plotted points were positioned. A measurement of distance of the y-value by means of horizontal lines to the intersection of the tangent line at molar fraction points was obtained. The partial molar volume was then determined by the addition of the initial molar volume of the mixture. Surface tension is a measurement of the cohesive energy present at an interface. The molecules of a liquid attract each other. The interactions of a molecule in the bulk of a liquid are balanced by an equal attractive force in all directions. Equipment and glassware used in the experiments were Du Noüy tensiometer (see Appendix D, Figure 2), 50-mL volumetric flasks, 1-mL pipets, rubber aspirators. Du Noüy ring method is one technique by which the surface tension of a liquid can be measured. The method involves slowly lifting a ring, made of platinum iridium alloy, from the surface of a liquid. ...read more.

From the data, it can be seen that cyclohexane has higher value of viscosity compared to benzene. This difference in viscosity is due to the intermolecular forces (can be attractive or repulsive) acting between neighboring particles of each liquid. Regarding these forces, if each molecule has strong cohesion with each other, it will allow them to be more intact, thus increasing the resistance of the liquid to flow. It is known that all molecules exhibit London dispersion because everything has an electron cloud, however in our case; cyclohexane exhibits a greater force since it has a higher molar mass of 84.16 g/mol. Aside from cohesive forces, viscosity of liquid is also affected by the size/shape of the molecule. The longer/bulkier the molecules of a fluid is, the greater is the tendency for them to be tangled, providing greater resistance to the fluid?s flow. This factor is held responsible for the difference in the values of viscosity obtained for the samples wherein both of them have comparable composition and orientation. Furthermore, by analyzing the structures of the samples, it can be noticed that benzene is smaller/ less bulky due to the presence of double bonds, hence, has lower value of viscosity. For the effect of varying concentration on viscosities of the binary system listed on Table 1.11, it is shown that when the amount of cyclohexane is increased, the resulting viscosity also increases proving that the viscosity of the system is approximately a linear function of the concentration. Thus, the viscosity of solution compared to a pure solvent is greater. Based from the data and results of the experiment, the hypotheses given by the students were all proven null and thus, it was disproven. Therefore, there is significant difference between the changes in concentration and the viscosity of the system, there is also significant difference between the changes in concentration and the surface tension of the liquid and the data of the partial molar volume of the system is acceptable that there is a significant difference between the observed and expected value of the partial molar volumes of the system. ...read more.