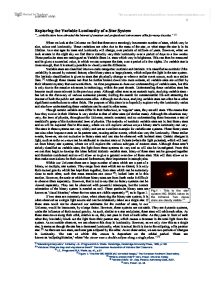 Exploring the Variable Luminosity of a Star System "...variable stars have attracted the interest of amateur and professional astronomers alike for many decades." [1] When we look at the Universe we find that there are a seemingly innumerate number of stars, which vary in size, colour and luminosity. These variations are often due to the mass of the star, or what stage the star is in its lifetime. As a star ages its mass and luminosity will change, over periods of millions of years. However, when we look at stars in the night sky we find that a minority vary their luminosity over a period of days to a few weeks. These particular stars are catalogued as Variable Stars i.e. stars which vary in brightness. This can then be measured and be given a numerical value, in which we can compare the data, over a period of a few nights. If a variable star is close enough, then it is actually possible to visually see the difference. Variable stars are classified into two main categories: extrinsic and intrinsic. It is classified as extrinsic if the variability is caused by external factors; often binary stars or large planets, which eclipse the light in the star system. The intrinsic classification is given to stars that physically change or where a stellar event occurs, such as a stellar flare. [2] Although these classes can then be further broken down into more subsets, all variable stars are unified by their inherent mystery that surrounds them. As time progresses so does our understanding of variable stars, but this is only due to the massive advances in technology, within the past decade. Understanding these variables stars has become much more relevant in the previous years. Although often seen as an esoteric topic, studying variable stars has led to the discovery of various extrasolar planets; fuelling the search for extraterrestrial life and attracting the interest of both the public and astronomers alike. ...read more.

However, these neutron stars have originated from stars many times larger than our sun, to a size of a small city. Consequently, some neutron stars can be rotating at a rate of 1000 times a second. [17] These neutron stars can also be extremely hot, as they will have retained the heat, from the stellar core, which would have reached into the many millions of degrees. This heat is then radiated into space, as x-ray light. When these are first born they are incredibly hot and can easily be observed, when viewing in x-ray light. However, neutron stars are, in essence, a sphere of neutrons. Within them, they have no processes which can generate energy, as in a star. Their temperature cannot be sustained, with the constant radiating of light. Over long periods of time they begin to cool down and subsequently radiate less energetic light. The luminosity of these neutron stars will decrease as they cool, until eventually they are the same temperature as deep space; a few degrees above absolute zero. However, this cooling down takes billions of years; a period such that the Universe is not yet old enough so that cool neutron stars exist and the existence of cool neutron stars would only be able to be inferred from their gravitational effects. Over their active lifetime, neutron stars can turn into Pulsars. The reason why this occurs has many theories, although it is though that it is an evolutionary process, where only specific neutron stars can become Pulsars. [18] Pulsars are a subtype of neutron stars. Similar to Cataclysmic variables, particles can get caught within the Pulsar's magnetic field and stream out of the poles, creating powerful beams of light. Similar to white dwarfs, if the rotational axis is not aligned with the magnetic poles the Pulsar acts like lighthouse where we can only view the Pulsar if the beam of light is pointed directly at us, as in figure 1. ...read more.

[36] This essay is by no means a complete list of all the variable stars. However, it demonstrates the various different processes by which a star system can change its luminosity, when viewed here on Earth. When we consider the variety of stars in our Universe, it is no surprise that there are also many different types of variable stars. The classification of variable stars is somewhat vague, as the word 'variable' can denote many things and it is inevitable that all stars, in some point in their lifetime, will vary. For example, neutron stars, looked at in this essay, are not strictly classed as variable stars, despite under examination we find that their luminosity does vary. This is, in part, the reasoning behind the choice of the title. Purely looking at stars which were classified as variable stars would have restricted greatly the range of celestial bodies explored. As we've seen throughout this essay, star systems can vary due to effects of other stars, such as Cataclysmic variables, or vary due to factor inherent in their own nature, as with Wolf-Rayet stars. In all cases, this has caused an alteration in luminosity. It has become evident that the term 'variable luminosity' is quite vague and can have a variety of definitions, determined by how it is looked at. As such, the sensible conclusion was to cover all the different ways what it could mean. Despite there being a large leap forward, with our understanding in variable stars, it is still incomplete. Matthew Templeton, from the American Association of Variable Star Observers, stated that "We also still have to build stellar models relatively simply usually making very simple approximations of stellar structure, since 3-dimensional models of stars still require an enormous amount of computational power." [37] The largest limiter to our understanding is indeed money and finance; something that is unlikely to change, in the near future. ...read more.