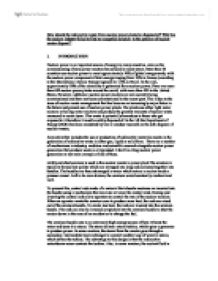 How should the radioactive waste from nuclear power plants be disposed of? Why has the nuclear industry failed to find an acceptable solution to the problem of nuclear waster disposal?

How should the radioactive waste from nuclear power plants be disposed of? Why has the nuclear industry failed to find an acceptable solution to the problem of nuclear waster disposal? I. INTRODUCTION Nuclear power is an important source of energy in many countries, even as the commissioning of new power reactors has slowed in recent years. More than 30 countries use nuclear power to meet approximately 16% of global energy needs, with the nuclear power component of total energy ranging from 76% in France (according to the International Atomic Energy Agency) to 1.4% in Brazil. In the U.S., approximately 20% of the electricity is generated from nuclear power.There are more than 400 nuclear power plants around the world, with more than 100 in the United States. However, additional nuclear power reactors are not currently being commissioned and have not been commissioned in the recent past. This is due to the issue of nuclear waste management that has become an increasingly major factor in the future and present use of nuclear power plants. The plants use either light water reactors or boiling water reactors and produce the greatest amounts of nuclear waste measured in curies /year. This waste is potentially hazardous to those who get exposed to it therefore it must be safely disposed of. In the US the Department of Energy (DOE) has been mandated by law to conduct research on the safe disposal of nuclear wastes. Any action that includes the use or production of radioactive materials results in the generation of radioactive waste in either gas, liquid or solid form. There are a number of mechanisms in industry, medicine and scientific research alongside nuclear power generation that produce waste as a byproduct. I shall be citing nuclear power generation as my main example of one of these. mildly enriched uranium is used in the nuclear reactor a power plant.The uranium is typically formed into pellets which are arranged into long rods collected together into bundles. ...read more.

International agreements may prevent seabed disposal but would be packaged into chemically stable canisters and inserted into stable floor sof deep ocean. LLW disposed of in landfills, dig trenches and fill with packaged LLW then cover a thicker than usual layer of the soil and geologic materials removed. Like all industries, the thermal generation of electricity produces wastes. Whatever fuel is used, these wastes must be managed in ways which safeguard human health and minimise their impact on the environment. Nuclear power is the only energy industry which takes full responsibility for all its wastes, and costs this into the product. Nuclear power is characterised by the very large amount of energy available from a very small amount of fuel. The amount of waste is also relatively small. However, much of the waste is radioactive and therefore must be carefully managed as hazardous waste. Radioactivity arises naturally from the decay of particular forms of some elements, called isotopes. Some isotopes are radioactive, most are not, though in this publication we concentrate on the former. There are three kinds of radiation to consider: alpha, beta and gamma. A fourth kind, neutron radiation, generally only occurs inside a nuclear reactor. Different types of radiation require different forms of protection: * Alpha radiation cannot penetrate the skin and can be blocked out by a sheet of paper, but is dangerous in the lung. * Beta radiation can penetrate into the body but can be blocked out by a sheet of aluminium foil. * Gamma radiation can go right through the body and requires several centimetres of lead or concrete, or a metre or so of water, to block it. ll of these kinds of radiation are, at low levels, naturally part of our environment. Any or all of them may be present in any classification of waste. Radioactive wastes comprise a variety of materials requiring different types of management to protect people and the environment. ...read more.

level of radioactivity, may require a similar degree of isolation from man's environment, and therefore should be borne in mind when discussing radioactive waste disposal options. By far the most important of these other waste types is generally referred to as alpha-bearing wastes (also called transuranic (TRU) waste) because of its relatively high concentration of long-lived radionuclides that emit alpha particles as they decay. Indeed, these wastes are produced in volumes greater by a factor of 5-10 than HLW. A main difference between such wastes and HLW, however, is that TRU waste does not generate intense levels of radioactivity and heat. II. When will disposal of HLW be necessary? HLW, whether spent nuclear fuel or vitrified reprocessing waste, generates such intense levels of both radioactivity and heat that heavy shielding and cooling is required during its handling and temporary storage. The wastes are therefore best stored in specially engineered cooling pools or vaults for several decades prior to disposal. While stored, both the temperature and radioactivity of the wastes gradually decrease, simplifying their handling and disposal considerably. Storage cannot be relied upon in the long-term to provide the necessary permanent isolation of the wastes from man's environment, and future generations should not have to bear the burden of managing wastes produced today. Seen from this perspective, while disposal of HLWis not an urgent technical priority, it is nevertheless an urgent public policy issue. These political aspects have led to the need for the nuclear industry in recent years to demonstrate the feasibility and safety of HLW disposal and, in some countries, laws have been implemented that require operational HLW disposal capability in the next 15-50 years. In particular, the Federal Republic of Germany and the United States plan to begin disposing of HLW in the early 2000s, France by about 2010, Belgium, Canada, Finland, Japan, Spain, Sweden, and Switzerland by about 2020, and the United Kingdom somewhat later. All HLW produced so far is currently being stored; no permanent disposal has yet occurred. III. ...read more.