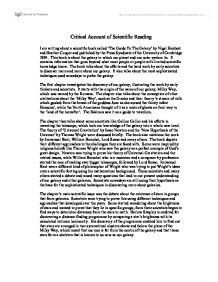 Critical Account of Scientific Reading I am writing about a scientific book called 'The Guide To The Galaxy' by Nigel Henbest and Heather Couper and published by the Press Syndicate of the University of Cambridge 1994. This book is about the galaxy in which our planet and our solar system lie. It contains information that goes beyond what most people or people with limited scientific knowledge know. The book talks about the efforts and the hard work by early scientists to discover more and more about our galaxy. It also talks about the most sophisticated techniques used nowadays to probe the galaxy. The first chapter investigates the discovery of our galaxy, illustrating the work by early thinkers and scientists. It starts with the origin of the name of our galaxy, Milky Way, which was named by the Romans. The chapter also talks about the conception of other civilisations about the 'Milky Way', such as the Greeks and their theory 'a stream of milk which gushed from the breast of the goddess Juno as she nursed ...read more.

Scientists were trying to prove this using different techniques and approaches that developed over the years. Some started wondering about the brightness of stars and wanted to prove that they lie in specific groups, from there scientists began to find ways to determine distances from the stars to earth. Harlow Shapley is credited for discovering a distance-finding programme by comparing a star's brightness with its calculated intrinsic luminosity. His discovery of the programme enabled him to find out that stars are arranged in two symmetrical clusters above and below the plane of the Milky Way, which meant that our sun is far from the centre of the galaxy and that those stars form a skeleton that is known to us now as our galaxy. The second chapter, which is called The Local Group talks about the neighbouring galaxies. Theses clusters of galaxies are the rule of the universe. They vary in sizes, with some clusters containing thousands of galaxies and some with few ones. ...read more.

I found the issues in the book interesting though hard to understand. The use of specific scientific terms makes it unsuitable for those with little or no scientific background, even though the book tries to explain the major concepts. The reader has to read it three or four times to make sense of some issues, but all around I think it is a challenging book as well as interesting. It talks about some of the scientists that we know little or nothing about in a detailed way and the reader does not feel that the book is biased to a certain scientist or an astronomer in any way. I conclude by reminding myself and others that the determination and hard work by early scientists in this field was huge. We have to emphasise the massive achievement by those scientists in designing the technology that we rely on nowadays. Without the invention of telescopes all that would not have been possible and without the basic concepts that we have built on and created our knowledge of the universe. ...read more.