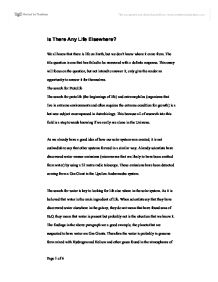 Is There Any Life Elsewhere?

Is There Any Life Elsewhere? We all know that there is life on Earth, but we don't know where it came from. The title question is one that has failed to be answered with a definite response. This essay will focus on the question, but not intend to answer it, only give the reader an opportunity to answer it for themselves. The search for Protolife The search for protolife (the beginnings of life) and extremophiles (organisms that live in extreme environments and often requires the extreme condition for growth) is a hot new subject encompassed in Astrobiology. This because all of research into this field is a step towards knowing if we really are alone in the Universe. As we already have a good idea of how our solar system was created, it is not outlandish to say that other systems formed in a similar way. Already scientists have discovered water masser emissions (microwaves that are likely to have been emitted from water) by using a 32 metre radio telescope. These emissions have been detected coming from a Gas Giant in the Upsilon Andromedae system. The search for water is key to looking for life else where in the solar system. ...read more.

Almost zero pressure and temperatures as low as -260 degrees below zero, then they were illuminated with UV light similarly to conditions they would be subjected to in space. When analysing the resultant grains formed the scientists found glycine, alanine and serine among the 16 amino acids produced. These interstellar clouds act as a melting pot for the simple gases that are the building blocks of all of the planetary systems and so are available to the whole of the solar system, galaxy and universe. These results of amino acids being created in interstellar space were achieved by two independent groups, although the groups abundances of amino acids were different, it is not seen as a problem. The differences in abundances of the amino acids created can be put down to the abundances of the original gases used. While flying through these interstellar clouds, the comets and meteors do themselves hold amino acids. It is suspected that they hold amino acids as they have been discovered in meteorites that have fallen to Earth, but never seen in space. Some scientists say that the amino acids found in meteorites are due to contamination from the Earth. But there are reasons to believe that the amino acids are not from contamination. ...read more.

These forces pull and contort the shape of the moons enough to give the sea enough energy to stay liquid. Enhanced pictures of the surface of Europa also show debris of meteorites that have crashed onto the surface. These meteorites could have brought protolife to Europa and perhaps extremophiles could have grown from them. Conclusion Discussed above are a few possibilities of extraterrestrial life elsewhere in the solar system. Possibilities for the discovery of protolife on the Moon, Comets, Mars and Europa have been discussed, however these are just a few possibilities due to the age of the solar system. The tube like structures found on ALH84001 are 4.5 billion years old, if they were once micro organisms then there was life in the solar system just as the Earth was forming. Amino acids have been found in comets and meteorites, and they are forming in interstellar clouds in outer space. This production the building blocks of life going on all over the solar system must be going on all over the galaxy and the universe. As the universe as we know it is infinite there must be life somewhere in the universe. Earth is a place in which life has flourished, in that we have liquid water and a suitable climate, a moon that holds the rotation of the Earth's axis steady. But what really makes us so special? Page 1 of 6 ...read more.