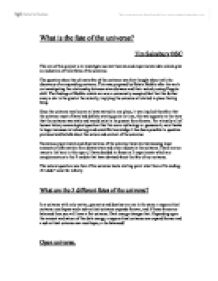 What is the fate of the universe? Tim Sainsbury BSC The aim of this project is to investigate current theories and experimental data which give an indication of three fates of the universe. The question about the ultimate fate of the universe was first thought about with the discovery of an expanding universe. This was proposed by Edwin Hubble after his work on investigating the relationship between stars distance and their velocity using Doppler shift. The findings of Hubble which are now a universally accepted fact that the further away a star is the greater the velocity, implying the universe all started in place the big bang. Once the universe was known to have started in one place, it was implied therefore that the universe must of have had definite starting point in time, this was opposite to the view that the universe was static and would exist in its present form forever. For virtually all of human history cosmological question like this were mythology or guesswork, now thanks to huge increases in technology and scientific knowledge it has been possible to question previous held beliefs about the nature and content of the universe. Numerous experiments and observations of the universe have started massing large amounts of information from distant stars and other objects in the universe. There are too many to list here in this report, I have decided to focus on 2 experiments which are complementary to the 3 models that have devised about the fate of our universe. The natural question was then if the universe had a starting point what then of its ending, if it didn't exist for infinity. What are the 3 different fates of the universe? In a universe with only matter, geometry and destiny are one in the same: a supercritical universe recollapses and a sub-critical universe expands forever, and if these forces are balanced then you will have a flat universe. ...read more.

In some models taking these two factors it has been shown that the observable value of the cosmological constant, may be remarkably well fitted for under a general hypothesis, but will still reliable upon the Planck number and radius of observable universe, which may contain large errors. The value for the cosmological constant is so sensitive to the input of these two numbers can be viewed as a drawback but also, as a positive feature of some models. There is in fact no `free parameter' in our model and the number of large dimensions could have been fixed beforehand, to respect of what we know already of our observable universe. This relates to the specific properties of the cosmic microwave radiation (CMB), which copy's the situation described, the conclusion can be made that just such a field is unnoticed, in our observable universe. The existence of scalar fields of very low masses is also demanded by other frameworks, as SUSY models, where the scaling behavior of the cosmological constant has been considered. Sphere has constant positive curvature. A A hyperboloid has constant negative curvature. B A shows that with a positive cosmological constant the universe would form a closed sphere. This would then suggest a open universe in which the universe could keep expanding. B shows that with a negative cosmological constant it would produce an open sphere, which could cause the universe to be unstably and collapse. Both of these spheres are solutions to Einstein's theory of general relativity, but just depending upon the value of the cosmological constant. Dark matter Originally astronomers started to think about dark matter, or dark energy was by studying the motions of stars in spiral galaxies they noticed that the mean star velocity did not drop off with radius from the galactic centre as rapidly as the falloff in luminous mass in the galaxy dictated according to Newtonian gravity. ...read more.

This new data ether will confirm present theory or maybe throw up new surprises which will challenge currently held beliefs At the start of this project I asked the question what was the fate of the universe, big crunch flat or open universe. The evidence and experimental data I have reviewed is challenging boundaries and pushing back the frontiers of what we know about the universe and our own physical world. Theories like string theory test our conception of the world around us by introducing models of reality with 27 dimensions as opposed to our normal 4 dimensions. AS for my own opinion after weighing up the evidence I view the most likely scenario as 1 in which the universe has a large amount of dark matter and a positive cosmological co0nbstant which would see the universe expanding forever into a cold dark dead universe. [7] However various instabilities may cause it to collapse, which would seem logical since there are two known things that break the strong energy condition, the universe and wormholes (existence not proved). In physics from studying basic mechanics (conservation of momentum) to nuclear physics (conservation of baryon number), it has been shown that conservation rules will always be obeyed. The example of the conservation of energy in regards to the universe it appears that the universe is one of the biggest breaks in the rule, all known energy is always conserved it more becomes less useful (entropy). A similar analogy (although not as big) is the creation of virtual particles, these are created from o energy and since the creation of the pair "violates" energy conservation, the pair must disappear really quickly. The universe was essentially creadted out of nothing so it makes sense that over a suffciently long time it would obey the energy conservation and collapse in upon itself giving back the energy used in it's creation. SO in summary the evidence from the type 1A supernova indicates that the cosmological constant is driving the universe apart into a cold dead existence. ...read more.