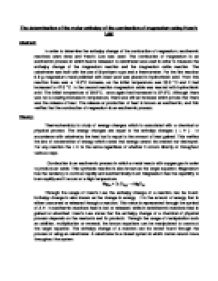 The determination of the molar enthalpy of the combustion of magnesium using Hess's Law Abstract: In order to determine the enthalpy change of the combustion of magnesium, exothermic reactions were done and Hess's Law was used. The combustion of magnesium is an exothermic process in which heat is released. A calorimeter was used in order to measure the enthalpy change of the magnesium reaction and the magnesium oxide reaction. The calorimeter was built with the use of Styrofoam cups and a thermometer. For the first reaction 0.5 g magnesium metal polished with steel wool was placed in hydrochloric acid. From this reaction there was a 14.0�C increase, as the initial temperature was 33.0 �C and it had increased to 47.0 �C. In the second reaction magnesium oxide was reacted with hydrochloric acid. The initial temperature of 33.0�C , once again had increased to 37.0�C. Although there was not a soaring increase in temperature, there was still an increase which proves that there was the release of heat. The release or production of heat is known as exothermic, and this verifies that the combustion of magnesium is an exothermic process. Theory: Thermochemistry is study of energy changes which is associated with a chemical or physical process. The energy changes are equal to the enthalpy changes ( H ) . In accordance with calorimetry the heat lost is equal to the amount of heat gained. This verifies the law of conservation of energy which states that energy cannot be created nor destroyed. ...read more.

Another technique that can be used is to replace the hydrochloric acid used in the experiment with water. When water is used instead of the acid, a change in temperature may occur and this will definitely provide a more accurate answer. Experimental Uncertainty 1. There is a potential instrumental uncertainty that occurs from the centigram balance. The centigram balance was used to measure the magnesium and the beaker possesses an uncertainty of 0.0001g. This may provide inaccurate data and alter the mass, resulting in an inaccurate calculation of the enthalpy change. As well, there is also an opening present on the balance, and the mass of air may have been added to the other masses that were calculated. 2. There is another potential instrumental uncertainty present in the graduated cylinder. The cylinder possesses an uncertainty of �0.5mL and as a result the measured value of the hydrochloric acid can be inaccurate. As a result there would not be an exact amount of 100 mL of HCl present in reaction. 3. A possible experimental error could have been present in the magnesium metal used. If all the MgO was not polished off using steel wool, it would result in an enthalpy that is lower than what would have been if the magnesium used was pure. Conclusion Exothermic reactions were produced when there was an increase in the temperature for the magnesium reactions. Using a calorimeter, for the first reaction with the magnesium metal, the molar enthalpy was -276kJ/mol. For the second reaction with the magnesium oxide, the molar enthalpy was a value of -69.7 KJ/mol. Through calculations using Hess's Law, the enthalpy change was found to be a value of -492.1kJ. ?? ?? ?? ?? ...read more.