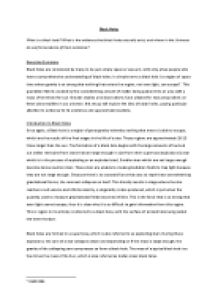 What is a black hole? What is the evidence that black holes actually exist, and where in the Universe do we find evidence of their existence?

﻿Black Holes What is a black hole? What is the evidence that black holes actually exist, and where in the Universe do we find evidence of their existence? Executive Summary Black holes are considered by many to be just empty space or vacuum, with only a few people who have a comprehensive understanding of black holes. In simple terms a black hole is a region of space time where gravity is so strong that nothing that enters the region, not even light, can escape[1]. This gravitation field is created by the overwhelming amount of matter being packed into an area with a mass of ten times the sun. Greater studies and observations have allowed for new perspectives on these abnormalities in our universe, this essay will explore the idea of black holes, paying particular attention to evidence for its existence and approximate locations. Introduction to Black Holes Once again, a Black hole is a region of great gravity whereby nothing that enters is able to escape, which are the results of the final stages in the life of a star. These regions are approximately 10-15 times larger than the sun. The formation of a black hole begins with the large amounts of burned out stellar remnants from stars that are large enough in size from their supernova explosions (a star which is in the process of exploding or an exploded star). ...read more.

Exist enables scientists to locate black holes that may be hidden or obscured behind dust, this is an important feature because evidence shows that 80% of black holes are hidden behind dust[2], effectively providing more a more accurate count of black holes within the universe. Investigation and studies are still being undertaken by scientists regarding Einstein?s prediction that where ever a black hole is created a ripple effect is also created within in space, this is much like the ripple effect waves create on water. Though no gravitational waves have yet been detected, experiments continue to be undertaken to prove or disprove this prediction. Evidence and Location It is not possible for telescopes that detect x-rays to detect black holes; however scientists are able to assume the presence of black holes by analysing matter in the radius. Scientists infer that a black hole passes or has passed through the matter when it is detected as being drawn inwards. Furthermore, there is evidence that black holes drastically affect the area of space it is surrounded by, via the release of strong gamma ray bursts, which are capable of destroying neighbouring stars. Black holes are also known to be able to accelerate and decelerate the growth of new stars. Evidence of black holes also comes from the gradational waves that arise when two black holes orbit each other. ...read more.

An accretion disk of a black hole has also been taken by the Hubble Space Telescope in the centre of the galaxy NGC 4261, where jets of plasma are also being released from the body. Rapidly orbiting stars has also been found in the Milky Way. This also holds a ring of orbiting gas clouds and jets of plasma; these also imply the existence of black hole. Black holes are also believed to exist in binary star systems, however only one star is visible. This implies that the second star is a black hole; this is further reinforced because it has been seen in the system Cygnus X-1. Scientists are also able to determine, via the observations of the orbit of the visible star in the system, that the second star is too large to be a white dwarf star or a neutron star, this proves with almost 100% certainty that a black hole exists. Conclusion In conclusion, black holes are very large bodies in which nothing, not even light, can escape, because of the gravitational force. These black holes are usually formed from collapsing stars. Black holes have been observed by the Chandra X-ray Observatory and the Hubble Space Telescope, both providing significant evidence to the existence and location of black holes. However further studies are needed to clarify and explain the strange existence of these black holes. ________________ [1] Wald 1984 [2] Wikipedia, Black hole, http://en.wikipedia.org/wiki/Black_hole, [3] Cambridge Relativity, Observational Evidence for Black Holes, http://www.damtp.cam.ac.uk/research/gr/public/bh_obsv.html, [4] Fortune City, Black Holes, http://members.fortunecity.com/oerlicon/SuperNovae/Black.html, ...read more.