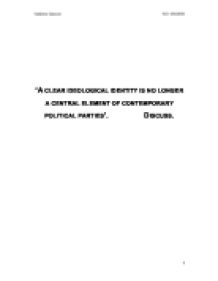 A CLEAR IDEOLOGICAL IDENTITY IS NO LONGER A CENTRAL ELEMENT OF CONTEMPORARY POLITICAL PARTIES.

'A CLEAR IDEOLOGICAL IDENTITY IS NO LONGER A CENTRAL ELEMENT OF CONTEMPORARY POLITICAL PARTIES'. DISCUSS. Political parties are a crucial element of the democratization process of developing countries as well as prospering developed democracies. They hold the government administration accountable controlling the political representation, structuring electoral choices and voters' interests. Ideology lies in the roots of a political party, identifying the values not only of the party itself, but of the group of society that elects it. It serves like a prescriptive guideline of interests and pursues that may sometimes twist reality, blinding a society tempted by utopian models. Although ideology is the core of every party created, nowadays its significance is either diminished and useless, or used as a curtain, covering real perspectives of candidates and political organizations and corporations. Through a careful examination of the ideological movement in time in Nigeria, France, USA and Russia, the essay is going to evaluate and justify whether the significance of ideology in those countries is still as valuable as it was before or it is merely 'nonsense upon stilts'. Party ideology is a set of political ideas representing the immediate connection of government and electorate bound by a concept for conflict prevention and state welfare. It was first regarded as the science of studying political theory by the French philosopher Tracy (Nnoli, 2003: 177), but due to social and political changes it soon embodied the set of ideas, not the science (Omotola, 2009: 616). ...read more.

Omotola (2009: 623) argues that 'if the parties had been guided by a clear commitment to a particular belief system and principles', the Second Republic of Nigeria would have avoided much of the conflicts that arose because they didn't. Despite the Third Republic's manifested left-right ideological divisions 'old lines of cleavages and primordial loyalties once again simply asserted themselves' as Yaqub (2002: 128) put it. 'Left and right, progressive and constructive' (Omotola, 2009: 615) ideological pathways were followed with no commitment; bind altogether by false promises for the welfare state. Parties were merely a 'disguised authoritarian rule' (Omotola, 2009:618) with no inter-connection, cohesion and ideological stance within themselves. Those crucial limitations lead to the Fourth Republic's parties break down, because of ideological disagreements. On the contrary, in France, both party and ideology are significant in the electoral system as they are interconnected within the party system in a way that if one of them is missing, there will be political instability. Since 1946 people have been surveyed and asked to position themselves on the left-right scale, defining that 'ideological identification' as 'socio-psychological attachment' (Lewis-Beck and Chlarson, 1995:494). That was in order to increase the voters' awareness of the ideological impact of their own decisions, which are of huge significance for the two-ballot of presidential elections in France. By the time Nigeria was drafting its constitution for the Third Republic, the French presidential election of 1988 confirmed that 'on an individual level, partisanship has a more direct impact on electoral choice than ideology' (Lewis-Beck and Chlarson, 1995:491). ...read more.

Many argue about the diminishing role of ideology in political parties in America, but they are 'recognised as significant mobilizing institutions' (Hill and Leighley, 1993). The 2008 presidential election rose the awareness of critics that 'liberal-conservative identifications have not only ideological implications, but also symbolic importance' (Jacoby, 2010: 567). In other words, the understanding of the whole political world is based on that ideology and once a person defines himself, it becomes easier to understand it and not only live in it, but participate and make a difference. Is it that people have grown complacent of political parties and government or is it that their representation has developed into a crucial illusion of values underneath which power and money politics rule. There a huge gap between the party systems of developing and developed countries. It has come to the attention of many critics that clear ideological stance is no longer that powerful a tool as it was a century ago. However, ideology lies in the roots of every party. It is still used in party identification and the individual identification among political society. It marks the strengths of political parties, their differentiation and influence. Serving as a collective force, ideology is still not dead, despite its recent segregation and derogation in political societies around the world. It is the centre of every party manifesto, a prominent factor in decision-making, policy formation and mobilization. People may understand the utopian words of ideological values, but it is still an escape from the harshness of political reality; it is something to believe in and cling to. ...read more.