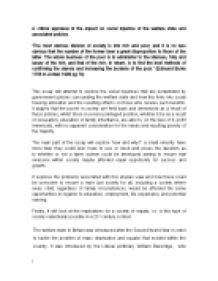 A critical appraisal of the impact on social injustice of the welfare state and associated policies.

﻿A critical appraisal of the impact on social injustice of the welfare state and associated policies. ?The most obvious division of society is into rich and poor; and it is no less obvious that the number of the former bear a great disproportion to those of the latter. The whole business of the poor is to administer to the idleness, folly and luxury of the rich; and that of the rich, in return, is to find the best methods of confirming the slavery and increasing the burdens of the poor.? (Edmund Burke 1756 in Jordan 1998 pg 74) This essay will attempt to explore the social injustices that are perpetrated by government policies surrounding the welfare state and how this links into social housing allocation and the resulting effects on those who receive such benefits. It argues that the poorer in society are held back and demonised as a result of these policies, whilst those in a more privileged position, whether it be as a result of occupation, education or family inheritance, are able to, on the face of it, profit immensely, with no apparent consideration for the needs and resulting poverty of the majority. The main part of the essay will explore ?how and why?? a small minority have more than they could ever hope to use or need and poses the question as to whether or not a fairer system could be developed aiming to ensure that everyone within society maybe afforded equal opportunity for success and growth. ...read more.

The realization for these young people is that Hardenburg, the cause of Jule?s downfall, was himself a leftist activist in his youth but the lure of riches and all that accompanies such wealth, had caused him to abandon his ideals for a life of luxury and he ultimately looks back on his experience as some youthful folly. The audience is left to ponder whether or not the same will be the case for the three young protagonists, should they fall prey to the lures of a lucrative career and the accompanying riches. This forces us to question whether or not it is possible to have a society where those who are better off in financial terms, could use this benefit to assist those who, through no fault of their own, are unable to become financially secure and independent of state help. It begs the question as to what amount of money is too much? What some individuals may see as adequate to live on, others may see as wholly inadequate and therefore this is always going to be subjective. What isn?t subjective however, is the vast gulf between those at one end of the spectrum and those at the other ? the haves and have not?s? This gulf needs to be addressed before a fairer and more inclusive society can emerge. To have a society where every person within it holds equal finance would be to hold a utopian ideal that would be virtually impossible to realize; but ...read more.

the richer and the poorer sections of society and a greater monitoring system needs to be put in place to ensure that this doesn?t happen. It is not realistically possible to create a society where everyone within that society is on a financial par, a point highlighted by Patrick Colquhoun who states that ?without a large proportion of poverty there could be no riches, since riches are the offering of labour, while labour can result only from a state of poverty?.Poverty therefore is a most necessary and indispensable ingredient in society, without which nations and communities could not exist in a state of civilisation?.? (Pierson & Castles 2006 pg 35). Whilst this may be true to some extent, the level of poverty needs to be relative to the level of riches. However, the main problem that exists in this ideological thinking is that the rich will always have the upper hand in relation to maintaining the status quo, whereby the poorer in society are controlled by their standards and power. Just like in the Edukators, when the young people feel that they can reach an understanding with their persecutor Hardenberg, the final twist proves that he cannot be trusted despite all his promises and apparent sympathy for their cause. In an allegory that represented the problems associated with the reunification of East and West Germany, it will always stand that the stronger will always rule the weaker regardless of the apparent equilibrium that social policies attempt to achieve. ...read more.