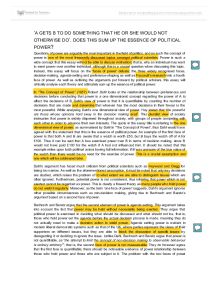 'A gets B to do something that he or she would not otherwise do. Does this sum up the essence of political power?

'A GETS B TO DO SOMETHING THAT HE OR SHE WOULD NOT OTHERWISE DO'. DOES THIS SUM UP THE ESSENCE OF POLITICAL POWER? Questions of power are arguably the most important in the field of politics, and as such the concept of power is one of the most frequently discussed topics amongst political scientists. Power is such a wide concept that this essay will not be able to discuss motivation; that is, why an individual may want to exert power over another individual, although this is a crucial question when discussing this topic. Instead, this essay will focus on the 'faces of power' debate; the three widely recognised faces, decision-making, agenda-setting and preference-shaping as well as Foucault's research into a fourth face of power. As well as outlining the arguments put forward by political scholars, this essay will critically analyse each theory and ultimately sum up the essence of political power. In "The Concept of Power" (1957) Robert Dahl looks at the relationship between preferences and decisions before concluding that power is a one dimensional concept regarding the power of A to affect the decisions of B. Dahl's view of power is that it is quantifiable by counting the number of decisions that are made and determine that whoever has the most decisions in their favour is the most powerful. ...read more.

They argue that political power is exercised in deciding what should be discussed and what should not be, that is, those who hold power set the agenda before the actual decision process is made, meaning they do not actually need to make a decision action to wield power. Agenda setting power is evident in modern liberal democratic systems such as that of the UK, where parties represent the views of their supporters on different issues, but they are able to block the discussion of specific issues by disregarding it or deciding to ignore the issue. Unlike Dahl, Bachrach and Baratz argue that power is not quantifiable, as "the attempt to limit the concept of non-decision making to observable behaviour is entirely arbitrary"ii; that is, the second face of power is not measureable. They do however agree that the first face is quantifiable; there should be noticeable evidence of power relationship between those who hold power and those who are subject to it. The problem with the two faces of power argument is that it does not take into account the case in which those who are subject to power do not realise that power is being exerted over them. Consequently, this issue gave rise to a three dimensional view as put forward by Lukes. Lukes believes that decision making and agenda setting fall short of the full definition of political power; the missing element in Lukes' view is preference shaping. ...read more.

practice becomes widely adopted as the result of many interactions until "the power of a norm or expectation of promise keeping has been created"iv. Pye looks at a political example in China by considering the norms that must be created to enable the formation of a democratic state. In order to create a democratic state, China needs a strong civil society, which can be built over time by creating norms such as freedom of speech. Although the promotion of freedom of speech may seem alien in China in the present day, over time if it is encouraged it will eventually become a norm in Chinese society. In the history of the UK there is evidence of norms having been changed gradually over time such as the abolition of sexism and racism and the promotion of equality so that today discriminatory behaviour has become unacceptable. To conclude, the ability of A to get B to do something that he or she would not otherwise do partially defines the essence of political power, but this is dependent upon issues such as the definition of power. The quote in the essay title is a quote from Dahl who is speaking with regard to his view that decision making is the only face of power. Although this is the only quantifiable face of power, the concept is certainly much more complex than this, as shown by Bachrach, Baratz and Lukes. ...read more.

1) This is a really common theme for essay titles in political analysis. Political power, and how it might be defined and measured, is really the backbone of what we do as political scientists - so it's wise to know the basic concepts that need to be covered in such an essay (the three faces of power, plus arguably fouth, Foucauldian face).

2) This response is well-written, workmanlike, and addresses the core themes that ought to be in here competently and broadly correctly. However, it is missing an intellectual angle - at no point do I really know what the author thinks! This means that it is highly unlikely to get more than a low 2.1.

3) What the marker really wants to know is *what you think*. Was Dahl right? If not, why not? In what circumstances? Why do people agree with Dahl? On what terms was this debate constructed? Does it miss anything out? What empirical applicability might the debate have? Etc, etc. These are the sorts of questions that distinguish really good answers in political analysis.