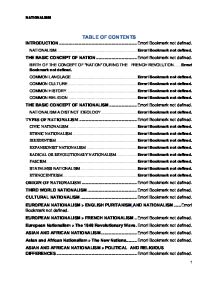 A Study of Nationalism and its relevance in Muslim States.

In the first 15 centuries of the Christian era, the ideal was the universal world-state, not loyalty to any separate political entity. The Roman Empire had set the great example, which survived not only in the Holy Roman Empire of the Middle Ages but also in the concept of the res publica Christiana ("Christian republic" or community) and in its later secularized form of a united world civilization. As political allegiance, before the age of nationalism, was not determined by nationality, so civilization was not thought of as nationally determined. During the Middle Ages civilization was looked upon as determined religiously; for all the different nationalities of Christendom as well as for those of Islam there was but one civilization-Christian or Muslim-and but one language of culture-Latin (or Greek) or Arabic (or Persian). Later, in the periods of the Renaissance and of Classicism, it was the ancient Greek and Roman civilizations that became a universal norm, valid for all peoples and all times. Still later, French civilization was accepted throughout Europe as the valid civilization for educated people of all nationalities. It was only at the end of the 18th century that, for the first time, civilization was considered to be determined by nationality. It was then that the principle was put forward that a man could be educated only in his own mother tongue, not in languages of other civilizations and other times, whether they were classical languages or the literary creations of other peoples who had reached a high degree of civilization. CULTURAL NATIONALISM From the end of the 18th century on, the nationalization of education and public life went hand in hand with the nationalization of states and political loyalties. Poets and scholars began to emphasize cultural nationalism first. They reformed the mother tongue, elevated it to the rank of a literary language, and delved deep into the national past. Thus they prepared the foundations for the political claims for national statehood soon to be raised by the people in whom they had kindled the spirit. ...read more.

I hope that God Almighty will not ruin, because of some temporary setbacks, the mighty community of the citizens of this country and their magnificent army which He appointed as the bearer of the 'flag' of the Qur'an and employed in its service for a thousand years. He will again enable them to disseminate the light of the Qur'an everywhere, and thereby continue to perform their essential duty. NATIONALISM AND THE PROBLEMS OF DEMOCRACY There is an inherent tension between democracy and nationalism leans toward the sentimental and volitional. Its inclination is to mold citizens' hearts and souls while fogging their capacity for critical reflection. It nurtures intense communal ties that inevitably foreclose or limit possibilities for difference and choice. Moreover, as it is usually understood, legitimate democracy requires these same capacities for critical reflection, difference, and free choice. Can, then, democracy and nationalism is compatible? Professor Nodia's argument is that they can. Indeed, his implication is that some measure of nationalism serves to promote a deep civic virtue without which democracy itself could not subsist The response to Professor Nodia offered in this essay argues that nationalism and the powerful civic virtue it promotes all to easily overwhelm the capacities of the citizenry for legitimate democracy. Claims that the potent forces of nationalism can be sufficiently domesticated for democratic purposes must be viewed with suspicion Thinner and more bloodless mechanisms of civic virtue are to be preferred. At least since Aristotle, students of democracy have recognized the irony that enduring democracies seem to require an undemocratic foundation. Democracy suggests unconstrained citizen rule, for example, but an enduring democracy must in fact constrain citizens from ruling in a manner that would endanger democracy itself. Any constraints on citizens' rule {demo's krait}, however, can hardly be called "democratic." Yet, would democracy subsist without those constraints on citizens (sometimes called "rights") and on their government (sometimes called "constitutions") that preserve democratic procedures themselves? Probably not on this point there exists little dispute among democratic theorists. There remains dispute, however, about the legitimate grounds for these sorts of constraints. ...read more.