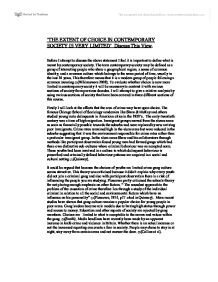 THE EXTENT OF CHOICE IN CONTEMPORARY SOCIETY IS VERY LIMITED Discuss This View.

'THE EXTENT OF CHOICE IN CONTEMPORARY SOCIETY IS VERY LIMITED' Discuss This View. Before I attempt to discuss the above statement I feel it is important to define what is meant by contemporary society. The term contemporary society may be defined as a group of interacting people who share a geographical region, a sense of common identity, and a common culture which belongs to the same period of time, usually in the last 10 years. This therefore means that it is a modern group of people following a common meaning (7)(Wikianswers 2008). To evaluate whether choice is now more limited in contemporary society it will be necessary to contrast it with various sections of society from previous decades. I will attempt to give a relative analysis by using various sections of society that have been covered in three different sections of this course. Firstly I will look at the effects that the area of crime may have upon choice. The famous Chicago School of Sociology academics like Shaw & McKay and others studied young male delinquents in American cities in the 1920's. The early twentieth century was a time of high migration. Immigrant groups moved from the slums areas as soon as financially possible towards the suburbs and were replaced by new arriving poor immigrants. ...read more.

In the 1950's women magazines encouraged women to return to domestic duties after doing industrialised occupations during the war. In more recent times magazines and their advertisers show women as being more dual purpose, working as well as looking after families. Advertisements present people with a lifestyle identity hoping that consumers will purchase symbols of that identity (4)(Woodward, p20). Women are under increased pressure to look and dress a certain way and choose products which help recreate media portrayed roles. In the same recent times work based identities for men have also changed in areas such as 'traditional apprenticeships'. These areas which they once dominated have been in sharp decline as the economy altered. Some researchers have argued that this as created a youth sub culture of laddish behaviour who reject education because of the lack of traditional craftsman's opportunities (4)(Mac an Gahill M, 1994 cited Woodward p67 2004). The work choices for 16 year olds are certainly more restricted and numbers staying on in education have greatly increased with 43% now going on to university. The changing face of the British economy as also had consequences for employment choices of older males. The closure of heavier industries like ship yards, steel works, and mining had a significant impact upon the labour market as the 'job for life' era ended. ...read more.